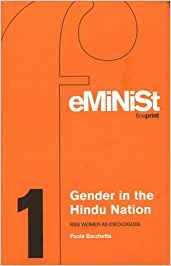 The two books, Paola Bacheta’s Gender in the Hindu Nation and Shahnaz Rouse’s Shifting Body Politics under review are similar in that they both approach the formation of state and nation through the discursive strategies adopted by civil society. Predicated upon a largely unstated Gramscian understanding of the state and civil society the books remark upon how civil society organizations and formations negotiate with and complement the state. They are both feminist interventions in the study of the state and look at how the apparatus shape women’s discourses and strategies. They both see gender as a crucial site of making meaning in any discourse of the nation and state. Yet, while both books work within these broad parameters, their approaches vary widely. Paola Bacheta’ examines a broad civil and political society that is in antagonism to the state, the RSS-Rashtra Swayamsevak Sangh (hereafter the Sangh) and its women’s wing, the Rashtra Sevika Samiti (hereafter the Samiti).