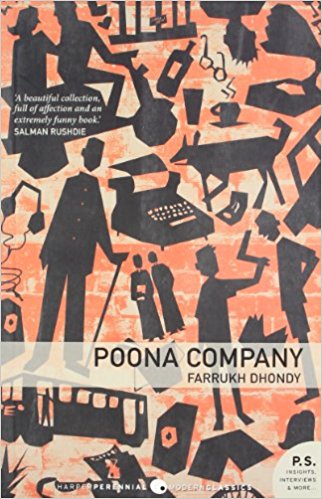 Farrukh Dhondy’s delightful collection of linked short stories, Poona Company, was initially published in 1980 and has been reissued in the Harper Perennial Modern Classics series. Largely centered around a cast of characters that hangs around Sarbatwalla Chowk in Poona in the 1950s, the book takes us back to a time that seems far away: its fifty years since the fifties. The collection also takes the reader back to an earlier moment in the now flourishing domain of contemporary Indian writing in English, a time when a handful of writers wrote and were published. For this reader, both journeys to the past were very welcome.

Since Dhondy’s father was in the army and travelled extensively, Dhondy lived with his grandfather, just a short distance from the chowk and its two Irani cafes. Young Farrukh, known as ‘nalha’, or small one, is initially outside the life of the chowk.After the age of twelve, he begins to pass by on his bicycle to and from school.

Slowly he is initiated into the life of the square and its motley crew of characters: his friends; Kolmi, the bookie; Samson, the large but poor man who bears the corpses of Parsis to the fire tower; the blind man and his black dog and other such distinct and quirky characters. Farrukh grows up through these stories by lying to his grandfather, befriending a gambler, admiring a journalist. Some of the characters from the chowk are also peers in Farrukh’s school. Their stories are centered in the school and college that Farrukh attends, before, as in the last of the nine stories that make up this collection, he wins a scholarship to the UK where he will study and eventually become a teacher, a writer of stories, novels, biographies, and screenplays, and commissioning editor for BBC Channel 4.

Very much a boy’s coming of age story, women and girls are only marginally present in the collection. As Dhondy says, the chowk ‘was the hangout of everybody who was able-bodied and male in the neighborhood’. Barring Zeenat, the daughter of a rich businessman who nips his daughter’s romance with Confession in the bud and Rani ki Jhansi, the beloved of Chamak, these stories are stories of boys and men and of the things boys and men do: gambling, drinking, tinkering with mechanical things, fighting. Stereotypically male as these activities may be, these are the ones that make up Farrukh’s world. The boys borrow books from thebackroom of the Punjab Book Exchange, books discreetly wrapped in brown paper. They know and watch with interest the unfolding of others’ loves, but are too young or too sheltered to be much concerned with romance themselves. Although based on Dhondy’s life, these stories are primarily concerned with the transition from boyhood to young adulthood through the relations boys have with each other and with older men.

Confession is one of the most memorable characters in the collection. A poor boy, initially supported by the padres of the school so that he is virtually their poster boy, Confession is expelled when the padres rummage in his school satchel and discover ‘unacceptable’ reading matter. With his dreams of a scholarship dashed, Confession bravely lives the ignominy of expulsion, goes on to top his exams, becomes a fearless journalist, and falls in love with Zeenat. Confession becomes an inspiration to the boy Farrukh, who is himself taking his first steps in what will become a writing life. Of course when the events shared in the story unfold, Farrukh’s writerly future has yet to gain shape. In retrospect, though, Confession seems a sort of centering force for our young protagonist: a fierce, passionate voice against caste and religious difference in the new India, Confession makes Farrukh think. Given the career Dhondy has gone on to have, one might say Confession passed a mantle on to the younger man.

Often funny, these stories have a sort of old-fashioned charm to them. For those of us living with the insanity and pressure that mark urban centers in contemporary India, the world Farrukh grows up in seems almost quaint. It is not that Farrukh and his friends don’t contend with issues that still dog us today, of which class and caste differences are the most significant. Rather, what seems old-fashioned is the simplicity with which children show respect to elders, members of Farrukh’s Parsi community interact with people on the chowk, and young boys explore their intellectual ideas. Given the virulent shape caste and religious differences have taken in the years since the 50s, the Poona Dhondy recreates reminds us of a time when communities were created with greater inclusiveness than in our new India. Another time is evoked in these stories with great vividness and gentle humour.

Harper’s new series has so far brought out two titles by Nayantara Sahgal and one by Mulk Raj Anand. Others are in the works. Beautifully produced, the series makes available classic works that have helped shape the multi-starred universe of contemporary Indian writing in English. Many youngerreaders, I am sure, have not read these older writers. I’m delighted that this new series makes available some of the strongest and most distinct voices of contemporary Indian writing in English.