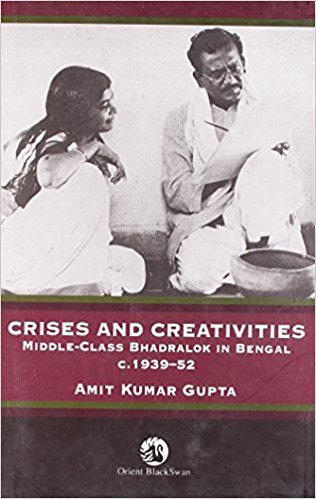 Crises and Creativities is a book that can be described in many ways. At one level, it is a book about the (Bengali) middle class. At another level, it is a book about vernacular Marxism, if such a term be permitted. At yet another level, this book is about a critical and still under-researched time of Indian history—the 1940s and 50s. And to me, personally, this is above all a book about the difficult and ever-changing relationship between the literary and the political. In all these aspects, this is an important and interesting book. And Amit Kumar Gupta writes with deep involvement in his subject, which is bound to move the reader.

Let me begin with the period that the book deals with—namely, Bengal between the Second World War and the first general election of 1952. This in itself is significant. For while there is now increasing scholarship on the immediate post-Independence years—the years of decolonization a la Sekhar Bandopadhyay, the after-years of Partition a la Jaya Chatterjee or the post-Gandhi years a la Ram Guha—it is only rarely that the decades right before and right after 1947 are thought together.