Sleeping With The Enemy? 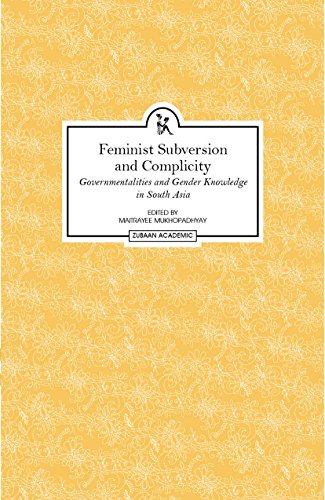 Sleeping With The Enemy?
Kalyani Menon Sen
Feminist Subversion And Complicity: Governmentalities And Gender Knowledge In South Asia by Edited by Maitreyee Muphopadhyay Zubaan Academic, 2018, 297 pp., 795
May 2018, volume 42, No 5

Professor Vina Majumdar, one of the grande dames of Indian feminism, was fond of telling the story of the South African MP who visited India in the late eighties. ‘Why do you need a women’s movement when your bureaucrats and you are saying the same things!’ was her tongue-in-cheek comment after a meeting with the Planning Commission.

To Vinadi and many of her contemporaries, this remark was not so much a sly dig but a validation of the rightness of their decision to wade into the thick of policy-making, taking their feisty politics into staid and protocol-bound meetings, arguing and negotiating with the bureaucracy to push feminist language and analysis into key policy documents like the Approach Paper of the Ninth Five Year Plan (1995) and the National Policy for Education (1988).1 Some feminists went even further and agreed to work with insiders—even become insiders—to design and implement initiatives like the Women’s Development Programme and Mahila Samakhya. The women who took this decision might have been feted by the bureaucracy, but were challenged by influential voices within the autonomous women’s movement. Charged with providing credibility and camouflage for the patriarchal state in its project of taming and domesticating women’s struggles in the ground,2 these ‘developmental feminists’ did not back down. Disputing the idea of the patriarchal state as a monolithic institution, they pointed out that programmes like Mahila Samakhya had become vehicles to take feminist thinking to the doorsteps of thousands of rural women, mobilizing them into collectives strong enough to take on local power holders on issues like sexual violence and caste discrimination.

The Beijing Confeence in 1995 opened the doors to many more such partnerships between feminists and the state across South Asia under the rubric of ‘gender mainstreaming’. However, by the end of the 1990s, even the most committed developmental feminists were admitting that gender mainstreaming, which was originally envisioned as a political process of reordering hierarchies of power and reshaping the framework of development, had played out very differently.3 Terms and concepts like ‘empowerment’ and ‘agency’, had been appropriated, dumbed down and scrubbed clean of every vestige of feminist politics and used to coax, coerce and bamboozle women into falling in line with the state’s economic game-plan.