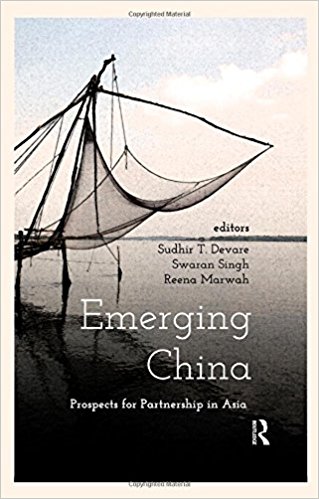 The (re)emergence of China over the last couple of decades as an economic powerhouse with significant military and technological prowess has a direct bearing on India in particular and the global order in general. The re-emergence of China and India in particular has resulted in a shift in locus of global economic power with Asia taking a central role in the current scenario. The Sino-Indian tango during the 2008-9 global econo-mic downturn and their efforts to arrest the global economic slowdown has further cemen-ted their place on the international stage.

This edited volume is the outcome of a three day international conference jointly organized by the Indian Council of World Affairs (ICWA) and the AAS between Novem-ber 21 and 23, 2009 in New Delhi. The con-ference has been slated to be the first in the series of Asian Relations Conference to mark the foundation day of the ICWA. The excellent design of the themes, chapters and selection of authors is a result of the planning and foresight of the conference organizers which has defini-tely added value and provided focus to the vo-lume which is in general missing from con-ference proceedings.

The book is a collection of twenty-two essays divided into three sections which broa-dly analyse firstly, the various aspects of Asian multilateralism, secondly, China’s regional vision, strategies and how its neighbouring countries like Japan, South Korea, Myanmar, Nepal, among others have responded to Bei-jing’s vision and thirdly, Sino-India equations in the context of an emerging China with India too staking claim to its place under the sun. It grapples with the important question of the likely implications of a rising China for other countries in the Asian region and India in particular. One of the questions that the book seeks to answer is whether the continued rise of China inevitably makes such a relation-ship adversarial or are there any prospects for partnership?