Secret Life of the Big Cat 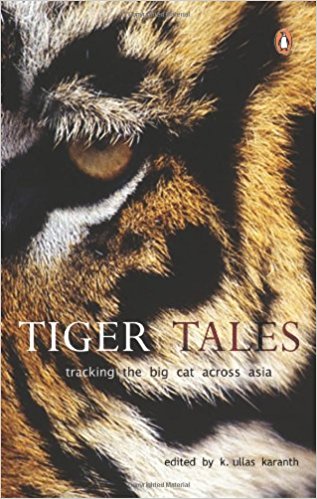 Tiger Tales, as is evident from the title, is a comprehensive anthology which brings together an eclectic set of writings on that most beautiful and mysterious of big cats, the tiger. Compiled by none other than Dr. Ullas Karanth, one of India’s most eminent wildlife biologists who has spent many years studying tigers in the forests of southern India, this collection serves as a wonderful introduction to what the editor terms an “enormous tiger library” consisting of “fiction, folklore, myths, shikar tales, natural history and science” (p.xi). The pieces incorporated here are not restricted to just India but also include writings on tigers in British Malaya, colonial Indo-China and Siberia, thus giving the reader a wider and more complex sense of the tiger’s varied ecologies. Moreover, these essays cover a vast temporal span of almost a century and consequently enable an appreciation of the changing attitudes towards the tiger over this period. Divided into three broad sections, each engaging with a diverse range of themes. The first section comprises mostly of extracts from colonial period shikar texts, including those of old favourites like A.A Dunbar Brander, the forester from the Central Provinces, and Kenneth Anderson, the hunter-naturalist from southern India who wrote extensively about life in the jungles, including his many encounters with man-eating tigers and leopards. Perhaps, one of the best pieces in this section is an essay on the numerous difficulties of photographing tigers by Fred Champion, a forester from the United Provinces who was also one of India’s earliest wildlife photographers. At a time when most people viewed wildlife primarily through the sights of their rifles, Champion was an ardent advocate of wildlife photography, constantly emphasizing that it was as skillful, exciting and dangerous a ‘sport’ as hunting, with the added benefit that it was also clean and bloodless. Indeed, an entire generation of hunters, including Jim Corbett, cited Champion’s stunning pictures as the inspiration behind their decision to increasingly replace the gun with a camera, and it is a pity that none of these photographs accompany his text in this collection.