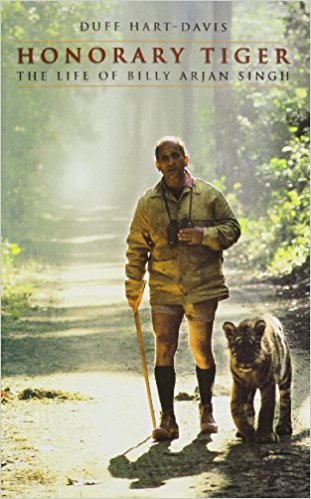 Billy Arjan Singh is an icon in the annals of Indian wildlife conservation. His contribution to the creation of the Dudhwa National Park and subsequently to the establishment of a Tiger Reserve there has been immense. His commitment to the cause is unquestionable. If he has had a failing it is that he did not extend his zeal to the rest of Uttar Pradesh and India. Numerous books have been written by him and about him. Honorary Tiger is a welcome addition to the ranks.

The book ancedotes in some detail the fascinating life-story of Arjan Singh. His lineage descending from the princely house of Kapurthala; the conversion to Christianity; the stewardship of the estate of Balrampur by Billy’s father and his first introduction to shikar and wild animals; his acquaintance with Jim Carbett; his tempestuous stint in the army and subsequent efforts in farming are all well accounted.

Then comes the conversion of the man. One would have preferred to read more about the saving of the Ghola barasingha herd, perhaps the single greatest contribution of Billy. But the raising of the leopard cubs Prince and Harriett and of the zoo born tigeress Tara, to adulthood and freedom, are described at length.