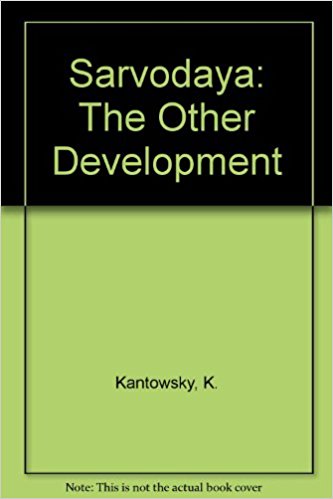 ‘SARVODAYA’ movement launched by Mahatma Gandhi and pursued by others like Vinoba Bhave and Jayaprakash Narayan in India, and A.T. Aryartne in Sri Lanka, has attracted the attention of scholars an over the world. The move­ment, which is aimed at development without dehumanization, is a challenge to the modern urban-industrial culture devoid of humane approach.

Sarvodaya has underlined the fact that material well being of man alone can hardly bring him happiness since the ‘economic man’ alienates himself from the social affection and from the society as well. Therefore, as Jayaprakash Narayan once said, ‘the cities have become great human forests’ with econo­mic and social relationship ‘utterly im­personal’ and created a new civilization which turned even neighbours into stran­gers. Moreover, according to him, ‘In a material civilization man has no rational incentive to be good’. However, Sarvo­daya is emphatic that in pursuit of deve­lopment if the rules of morality are broken, happiness and contentment can never be achieved.

Village was the nucleus of Gandhiji’s sarvodaya. For him India’s soul was in villages. In 1936 he wrote ‘I would say that if the village perishes, India will perish too. It will be no more India. Her own mission in the world would get lost.’ Indeed, the village reconstruction based on truth, non-violence, enlighten­ment and self-sufficiency was central to the sarvodaya concept developed by Gandhiji. Of course, the economic and social equality occupied a pivotal posi­tion in his “Constructive Programme.”

In Sri Lanka, the concept took the form of Sarvodaya Shramadana Move­ment which was based on the ‘sharing of one’s time, thought and energy for awakening of all”. A notable aspect of the movement in Sri Lanka is the domi­nant religious flavour in it and its close association with the Buddhist culture and the substantial participation of Budhist monks in the promotion of the movement. Also notable is the movement’s heavy dependence on foreign sources for financial and other support. Still the movement seems to have not got off the ground.

The book under review analyses the development of Sarvodaya concept both in India and Sri Lanka and examines the theory and practice of it in both the countries and tries to examine its rele­vance as a model for development. It begins with the background and the ideas which had initially influenced the thought process of Mahatma Gandhi in this direction. The origin of the concept has been traced to a train journey Gandhiji undertook in 1901 from Johannesburg to Durban, in South Africa, when he read John Ruskin’s famous book ‘Unto This Last’, which was presented to him by a friend to read during the journey. It also deals with how Gandhiji had developed the concept by bringing in non-violent means like civil disobedience and satya­graha to its ambit.

The author views that Sarvodaya’s work ‘in the rural peripheries is bound to remain more or less marginal, as long as the urban centres retain their control over the rules that regulate the exchange of goods and ideas. In his opinion, the movement did not succeed to the ex tent it was envisaged earlier and that there is a “certain gap” between the theory and practice of Sarvodaya. But, he says: Sarvodaya’s practical performance has not invalidated its development concept since the Movement was never really been given the change to put this concept into practice.’

The author gives a graphic account of how after an initial response the bhoodan-gramdan movement, launched by Vinoba Bhave to quench the land hunger of the landless peasants, gradual­ly lost its momentum and how sarvodaya leaders like Jayaprakash Narayan got disenchanted with it and started rethink­ing about the entire movement which finally led him to give the call for the “total Revolution” aimed at the basic changes in the socio-economic fabric of the Indian society.

While the author seems to have taken much pain to make this analysis and achieved considerable success in presen­ting a comprehensive picture of the Sarvodaya movement in India and Sri Lanka, the book suffers from a few not­able drawbacks. The limited sources on which the author seems to have depen­ded for the analysis of the movement in Sri Lanka reduces certain sections of the analysis to the level more or less of an administrative report on the activities of the Sarvodaya Shramadana Movement with a surfiet of petty details. Similar is the author’s feeble attempt to give a global dimension to the sarvodaya move­ment by piecing together a few isolated  developments, ‘Shakertown Pledge’ for example, which have remote semblance to the basic concept of Sarvodaya. Indeed, a few isolated actions of a negligible number of rich elite in advanced coun­tries who were moved by an urge to do something for the poor during a holiday can hardly form parallels to Sarvodaya movement in any meaningful sense.

Similarly, there is an over doze of sociology the analysis and an attempt to see every development mainly from a sociological angle which has affected the balance of the analysis. This bias is found in the author’s enthusiasm to link Sarvodaya with major religions like Hinduism, Buddhism and Christianity.

The author’s observation that sarvo­daya in India and Sri Lanka was the ‘rediscovery of a glorious past of village life as a guide to a better future’ seems to be an oversimplification. Similarly, his observation that ‘most Indian scholars no longer consider a Gandhian approach ‘feasible’ for their country’ is certainly a wrong reading. He cites Rajni Kothari to substantiate this. It is too flimsy a basis since few in India would consider that Rajni Kothari’s view has the representative character of the Indian scholarship. Equally wrong is his reading that ‘Khadi, hand-made cotton materials, degenerated into a national costume of the governing class that the poor villagers could not afford’. Indeed, Khadi provides the cheapest variety of clothes available in India for the poor. The author would have realized it if he had bothered to enter any Khadi Grammodyog Bhavan in India and com­pared the prices. The author’s observa­tion that ‘It seems as if under the pre­sent condition a social reconstruction of the Indian village community is not possible without a revival of its commu­nal elements’, could at the most be dis­missed as an aberration of a German sociologist who could not make the dis­tinction between the conditions of villages in ancient India and the present.

The book contains a lot of irrelevance also. Even Rajileesh of Poona for example, has found a place in this analysis of Sarvodaya. Its quality of production has also been bedevilled by several printer’s devils which obviously is the result of inadequate care.

However, the book will be valuable to students engaged in the study of develop­ment models. Part I, which analyses the concept of Sarvodaya, is specially inter­esting to read.

Vivekanandan is a Reader at Jawaharlal Nehru University, New Delhi.

Notes from the Underground
September 14, 2017