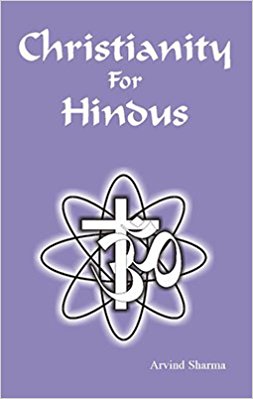 The premise of the book is a pleasant surprise as you realize that a person from one religion is making an effort to understand another’s as well as bridge the gap between two communities. Neatly organized into bite sized portions, the book promises to explain the largest practised religion to one of the oldest civilizations. ‘Why Study Christianity?’, ‘Who is Jesus Christ’, and ‘Christianity in India’ are just some of the chapters.

If you imagine the book reads like a simplified version of the Bible, you are mistaken. The author examines the role religion has played across the world and particularly the way Christianity has influen-ced the West. It goes on to illustrate these with historical facts and excerpts, examining pass-ages and drawing parallels from Hindu texts. The first thing that hits you about the book is that it is not really fare for young adults unless they are deeply interested in theology and religion.

The writing is well researched and the comparisons drawn up make it easy for a Hindu to understand what the author is trying to explain. What the book lacks though is fluidity of language. It is also rather dry and unlikely to arouse the interest of a young person.
Almost like a research paper, it gives you example after example of how you can compare the Bible to passages in the Veda, living up to the promise in its title; comparing the Christian Holy Trinity to the Hindu Brahma, Visnu and Shiva. Where I feel it fails though is that it shows you the letter of the law, without giving you a sense of the spirit. Having read through it, you feel as much at sea as you did when you began, having only a few extra dates and facts in your possession.Perhaps it might have helped to give an outline of the Bible along with salient features, not just timelines.

A very interesting portion deals with Christianity entering India and it makes a lively chunk of history reading. The last chapter, ‘Must Christianity Proselytize?’ is an important topic in a book such as this, as it is one of the most controversial issues in the country. While the author has worked hard to give a historical as well as religious perspective on it, there seems to be a slightly judgmental tone towards the end that it could have well done without. However, having read the book, it seems unlikely that a child would be interested in such topics, let alone have the maturity or the breadth of knowledge to deal with such matters. It would do far better in the hands of an adult who having spent time on his/her own religion, is interested in knowing more about others.