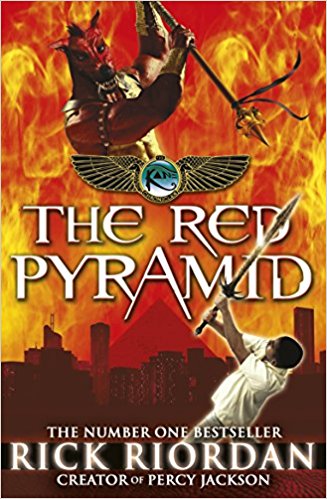 The Red Pyramid is the first of the Kane Chronicles by Rick Riordan who updated Greek mythology in his Percy Jackson stories: Olympus is parked above Manhattan, and Percy (Perseus) is Poseidon’s son in a twenty-first century order of demigods. Riordan has now updated Egyptian mythology in much the same way. W. Carter and Sadie are incarnations of the Egyptian deities Horus and Isis. Their mother is dead; their father, Dr.Kane, whom they thought was an Egyptologist, performed a spell in the British Museum, unleashing ancient forces of evil, including Set who has imprisoned Dr.Kane under the Red Pyramid he is building in the New Mexico desert. Once the Pyramid is completed, the world will be engulfed in chaos. Carter and Sadie become embroiled in a cosmic battle of order versus chaos which takes them underground and across the world, to the past, and into dreams and visions.

They are helped in their adventures by a baboon and their cat Muffin who is really a sacred Egyptian cat who becomes a slinky human female when required. As in the Percy Jackson series, the fantasy is well-researched. But the story gets lost in the breathless non-stop, high pitched excitement, the running, screaming, whooshing and zooming. ‘Why are they doing this?’ one wonders. But the book is meant for 9-year olds.Sadie and Carter narrate alternate chapters, and pretty soon their voices merge yet we never mistake one for the other. Carter has travelled extensively with his Egyptologist dad. He can decode Egyptian mythology, kings, rituals, and hieroglyphs. Sadie reads and has other knowledge.

Divine Egyptian power is present in our world, as pyramidical shapes in architecture, for example. Thoth, god of wisdom, is an absentminded professor at the University of Memphis. He sets Sadie and Carter a quest: they must fetch him an object from Elvis’s grave. Sadie tells Carter that a great musician is buried in Graceland. ‘Michael Jackson is buried here?’ asks Carter. Unlike Sadie, he hasn’t grown up listening to his grandmother’s Elvis collection.

Does The Red Pyramid work? I have just read the tender, sad, hopeful Moominland in November, the last of Tove Jansen’s Moomin books. With its slow pace and delicately shaded characters, it makes one look at roots, trees, mist, cold, friendship, loss, despair, happiness, and solitude as if they have just been created. It’s a galaxy away from the over-heated pace of The Red Pyramid.

The 39 Clues series have nine titles published in the last three years. When rich grandmother Grace dies, she makes her orphan grandchildren Amy and Dan choose between getting one million dollars each and finding 39 clues. They choose the clues and are soon racing against the rest of the Cahill clan who have been collecting the clues for centuries. Whoever has all the clues will have power over the world. But this isn’t your common Superman Comics villainous situation. Power over the world can be power for good, which is why Amy and Dan must get those clues. They must also discover which tribe they belong to. Amy and Dan’s parents have been murdered, their home burnt down. Whom can they trust? That’s where the suspense lies as they chase clues through six continents, on the summit of Mount Everest, in a hurricane, a volcanic eruption, and the belly of a mountain. The demigod Peter Jackson travelled magically while Amy and Dan are helped by money and air tickets which their efficient 20 year-old, spiky haired, nose-ringed baby sitter procures (‘Au pair!’ an exasperated Dan keeps reminding her).

In a characteristically cheerful un-Gothic Riordan mode, time and distance are erased as people die, re-appear, and change shape. The ancestors of these well connected Cahills include the Pharaohs, Mozart, Shakespeare, Marie Antoinette, Beethoven, and Napoleon, belonging to the Janus, Ekaterina, Lucian, and Tomas branches. They’re all devious and ruthless but they all fear the Madrigals, the mysterious fifth branch.

As clue hunters zip madly and seemingly without purpose from one end of the globe to the other at a very high speed without let or pause, they chat about books,history, mythology and museums. The information is neither dumbed down nor heavy-handed. Apparently the series is a great hit with the 9+ target reader. That’s impressive.

The story line, the accompanying game at www.the39clues.com, and the first book, The Maze of Bones, are by Rick Riordan. Publishedat breakneck speed over two years, these are horribly expensive books.