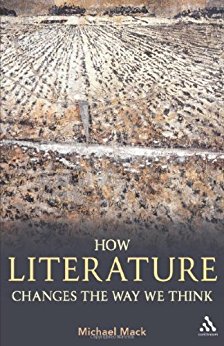 Role of Literature: Critiquing Fictions
Michael Walsh
HOW LITERATURE CHANGES THE WAY WE THINK by Michael Mack Continuum,London, 2012, 2012, 208 pp., price not stated
May 2012, volume 36, No 5

Upon opening this book, the first thing that will no doubt strike the reader is the ambitious aims. It sets itself the not inconsiderable project of defining a ‘new literary theory’ which combines ethics with aesthetics, and represents a break with ‘the traditional approach (to literature) from Aristotle to Heidegger and de Man to Zizek’. The traditional approach to literary studies which Mack seeks to establish a break with, places the emphasis on the mimetic function of literature. This mimetic function, he argues, focuses on literature’s ability to reflect, and thus to perpetuate, narrative constructions of reality.

These terms are worth clarifying. In this book, Mack continues from his earlier work in Spinoza and the Specters of Modernity in which he explores an intellectual tradition beginning with Spinoza’s critique of teleology as human fiction, which he terms the ‘hidden enlightenment of diversity’.

This tradition, he argues, seeks to critique our constructions of society and reality, whereby our choices are informed or grounded in a narrative construction of coherence, a ‘monolithic and fictitious conception of truth’. These constructions are responsible for nothing less than the coordination of the way we live within a given society. The mimetic tradition, Mack holds, subordinates the literary to the historical and political and, by emphasizing representation, places literature in a role where it is bound to passively represent the social, ideological, medical or economic narratives which inform it. This, he argues passionately, is to neglect much of the key functions of literature and art. The thesis of this book is that literature critiques these fictions.