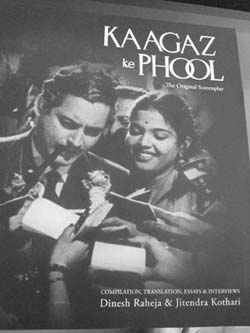 More than fifty years after its initial release Guru Dutt’s Kaagaz ke Phool (Paper Flowers, 1959) remains one of Bombay cinema’s most enigmatic films. The film’s historical graph moving from initial box-office failure to subsequent cult status, its tragic narrative overlays with the director’s own life, its haunting visual imagery and its songs have become an unforgettable part of cinematic lore and continue to define the popular memory of the film in India.The film’s narrative focuses on the life of film director Suresh Sinha (played by Guru Dutt himself) and his tryst with fame, a journey that posits the figure of the uncompromising artist against commercial/popular demands of the film industry and societal conventions that ultimately result in a tragic, unfulfilled end.The book Kaagaz ke Phool: The Original Screenplay attempts to recreate the magic and cinematic enigma of the film by adopting,primarily, a literary lens that focuses on the film’s screenplay.