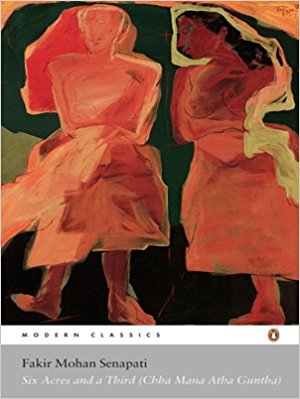 y far the best-known novel by the most loved Oriya writer, Fakir Mohan Senapati (1843-1918), Chha Mana Atha Guntha (Six Acres and a Third) has lost none of its century-old popularity in Orissa. It first made its serialized appearance in the magazine Utkal Sahitya between 1897 and 1899, and was published in book form in 1902. Since then it has never been out of print. Recognized as the first novel of social realism in Oriya, it has been rendered into four translations in English, apart from those in several other Indian languages, one dramatized version (entitled Champa by Basanta Kumar Satpathy), and a film version. It has been the subject of endless critical debates, seminars, and symposia, and has always been part of school and university curricula. However, there seems to be a discrepancy between its unassailable status in Orissa and its neglect at the hands of scholars outside, especially by Indian comparatists, except for a couple of references by S.K. Das in his Sahitya Akademi volumes, stray lectures by the redoubtable Namwar Singh, as also an important essay by Amiya Dev. Another measure of its neglect is that even a thoroughgoing scholar of Das’s calibre has called Chha Mana Fakir Mohan’s second novel, and Lachhama the first..