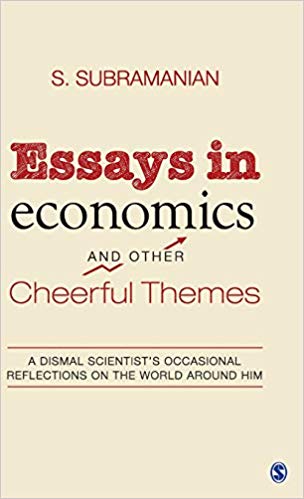 Economics, particularly development economics, is often criticized (and rightly so) for its narrow approach and increasing disconnect from the real world. Increasing inequality, persistent poverty and failure to create employment are all issues currently facing the world that economics does not seem to be addressing adequately. For instance, Ghosh (2015) has argued that there has been a shift in emphasis in development economics from being concerned with transformation (structural, institutional and normative) to just a focus on poverty alleviation. It has therefore become important to not just critically appraise the contents of development economics today, but also for economists to contribute to literature that broadens the scope of topics covered. In the book under review here, Subramanian puts together a collection of a number of his ‘less academic writings’ written between 2001 and 2013, over a wide range of issues. Although this is not the explicit intention, one of the central messages that comes out of the book is to bring back to economics concerns related to politics, society and philosophy.

Addressed to ‘young students of economics—undergraduates and postgraduates who are still not so “mature” as to have quite forsaken their taste for reasoning and relevance in favour of more alluring temptations of comfort and accommodation’ (p. xiii), the book is accessible to the general reader while at the same time provokes the expert to reconsider a number of concerns that one had taken for granted.

The book is divided into three parts. The first called ‘Of Home and the World’ includes nine articles on themes such as global and domestic deprivation and disparity. The second, ‘Between Economics and Philosophy’ has four essays on themes ‘at the intersection of economics, philosophy and political science’ (p. xii). And the third part, aptly called ‘Miscellaneous Mistakes’ includes four essays covering a range of issues including cricket, the state of institutions, justice and social choice theory.  The book covers a wide landscape ranging from the definition of poverty, inequality and deprivation to whether the creamy layer of SCs and STs should be exempted from getting preferential treatment in jobs and higher education.

What is striking as one reads this book is the uncanny relevance of the essays written over a decade back to contemporary issues of concern in the Indian economy, society and polity. Subramanian’s discussion on the silence in ordinary conversations, in the media and in academic institutions in the aftermath of the Gujarat riots and the justification of the silence based on the moral reasoning (consequentialist or deontic) has an almost eerie significance in the current context of mob lynching, cow vigilantism and killing of all forms of dissent. The warning he gives in this context, ‘if you will not brook the iniquities of caste, class and communal divisions of this country, just wait and see how much worse it can and will get. The wages of resisting moral justice are moral catastrophes—which you, and you alone, will have brought upon your heads’ (p. 106) seems like a prediction for 2018 made in 2002, which nobody paid heed to.

Not just on the issue of communal violence and divisions in society, but also on the neglect of human development and the single-minded focus on growth, poor investments and public spending on issues such as education and health, not enough attention being paid to increasing inequality are all issues that different essays in the book address.

In terms of the themes that emerge from the book, probably the most important is the issue of the scope of economics itself. The author shows how development cannot be reduced to economic growth alone and that issues of social justice, human development and human rights are integral to the study of economics. As Amartya Sen has pointed out, ‘the real limitations of traditional
development economics arose not from the choice of means to the end of economic growth, but in the insufficient recognition that economic growth was no more than
the means to some other objectives’ (Sen, 1983: 753). Understanding and measuring deprivation also cannot be reduced exclusively to income and consumption related metrics.

In one of the essays in the book, using a capability failure ratio (CFR) as an alternate measure of deprivation (an index of three dimensions of human achievement: knowledge, child-survival and a decent income-related standard of living), Subramanian discusses the extent of global deprivation and disparity. In another essay on the status of the child in India he presents a number of indicators related to child poverty such as child mortality, malnutrition and sex ratio. In explaining the presence of such disparity, he includes a historical analysis and political economy perspective including the shared history of colonialism and the politics of trade, aid and structural adjustment. The essays discussing the interplay between economics and philosophy bring to the forefront thoughts on the ideas of justice, egalitarianism, the values of liberty and equality. Through these essays the importance of normative values in informing development policy is also brought out. A number of alternate ways of looking at poverty and inequality are proposed—such as focussing on both the headcount ratio and aggregate poverty or for the Economic Survey to include quintile income statistics to bring the attention to inclusive development.

A related theme across the book is a critique of the methods and indicators used by economists. The premise though not explicitly stated anywhere is a call for democratizing economics as well as other social sciences. At different points in the book there is a criticism of overemphasis of mathematics, as well as complicated empirical work or theoretical literature embedded in postmodern jargon. This will probably be taken more seriously given the fact that it is coming from an economist who has himself written extensively using sophisticated mathematical models as well as empirical ones. One of the messages laced in the book is to simplify academics and academic language for others to understand.

Throughout the book, one finds small nuggets which offer a peek into what the author thinks about the use of jargon as well as the emphasis on sophisticated mathematical techniques to explain economic problems. For example, ‘…while a considerable quantity of “mainstream” economics (arguably) employs mathematics or formalism in the cause of pretentious and hollow “theorem-mongering”, there is also constructive uses to which the tradition (or habit) of formalization can be put. One of these is to clarify the basis of claims made in positive and normative reasoning, and thereby to advance the possibility of disagreement founded in understanding rather than misunderstanding’ (p. 161). Therefore, he is critical and appreciative at the same time.

Here, the lesson is that while academic rigour is definitely important, there cannot be the hegemony of a specific kind of economics on defining what rigour is—be it mathematical, empirical or theoretical of any persuasion. This is particularly relevant in the context of policy making where in recent years, there has been an increasing influence of development economists who are votaries of ‘evidence-based policy making’. Randomized Control Trials (RCTs) are placed on some sort of a pedestal as far as ‘evidence’ is concerned and it is argued that all other bases for policy decisions is futile. In this context, Jean Dreze’s contention that while economists can contribute to policy debates and discussions, they have no particular
privilege over those from different disciplines and even other walks of life such as civil society activists is especially relevant (Dreze, 2018).

In an article published in the Economic and Political Weekly, Subramanian (2015) exposes the shallowness of mainstream development economics where economists seem to perceive their role more in justifying existing poverty and inequality rather than finding solutions to overcome them. Written in the form of a note to budding development economists, he says for instance, ‘You can please the establishment silly by doing some really snazzy econometric work which demonstrates that, in appropriate adult-equivalent units, two square meals are actually three circular meals (or four rectangular meals under a suitably normalized B–P Approximation, whatever that might mean: who the hell’s going to know the difference anyway?)’ (p. 2015).

By putting together such diverse articles in one place, this book also shows the complexity of human lives and the impossibility of studying them through simplistic disciplinary lenses. The discussion is a much needed one and will hopefully result in the discipline being rescued from the path it has taken into trying to be more of a natural science than a social science. Following the 2008 global financial crisis, there is a re-opening across the world on what should be taught as basic economics in undergraduate and graduate courses. For instance a group of economists from across the world have got together to create an online resource called Core (Curriculum Open access Resources in Economics) Economics to aid teachers of the subject to introduce it in a way that is more ‘accessible, relevant and real-world economics’1. Another international network called Rethinking Economics has been formed for ‘building a better economics in society and the classroom’ and one of the ways they do it is through ‘democratising economics through creative, jargon-free workshops and classes’.2

While the book has been written for the general reader, it is also important for economists, especially teachers of economics to read it—and to introspect on what it is that we are teaching our students.

Communication Strategies For Corporate Leaders: Implications for the Global Market by Pragyan Rath and Apoorva Bharadwaj examines managerial communication from seminal theoretical and demonstrative vantage points through interdisciplinary amalgamation of the sciences and the liberal arts. It presents new paradigms which can act as game changers in tug-of-war business situations in the corporate world.