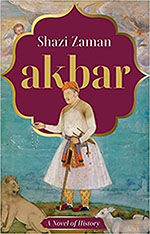 Akbar: A Novel of History is an English translation of Shazi Zaman’s Hindi novel Akbar (Rajkamal, 2016). The novel had attracted lots of critical attention and was applauded for its intricate narrative weave, historical authenticity and creative scholarship. In its present English avatar, the author repositions himself as a writer-translator to revalidate his labour of love and make it available to a potentially larger readership. In doing so Shazi Zaman, the English translator, has remained faithful to Shazi Zaman the Hindi writer, especially at the level of the narrative; the writer in him has not let the translator in him be swayed by the extant critical debate and, thus, did not allow him to recreate or recast the original narrative in the light of critical insights that this debate might have endowed the translator with. Zaman, the translator, nevertheless, seems to reposition the responses of his English readers through ‘textual-reorganization’ of/in the narrative from Hindi to English.  Here he has not only given his English translation a more cryptic title and a new cover but has also reduced the number of Mughal paintings/miniatures—that complement the narrative—to four (from six in the Hindi version), bunched them together and pushed them to the end of the novel.  This textual re-ordering and the minor editing (in the title and in his introductory remarks where 32 paragraphs of the original have been reduced to 30 in the translation) that it necessitates, though apparent only to those who might read both the versions of the novel, nevertheless, bears significantly on the narrative texture—its intertextual echoes and its readerly immersion of/in the English version. This rearrangement not only offers a new entry point into the English novel but also manipulates the intertextual span of the supplementary material embedded in it vis-à-vis its Hindi counterpart.