‘About the Dark Times’ 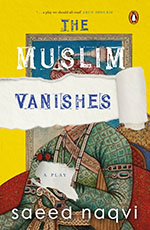 An itinerant and renowned journalist with a distinguished career and several books to his credit, Saeed Naqvi continues his literary output with a play in three acts. It would be difficult to give details about the play and yet do justice to its ringing tones of anger over a heritage betrayed, or the distress over what has come to pass. But to put in the barest of outlines: the first act in five scenes serves to establish the shocking disappearance of a minority community from a nation, and in doing so maps their presence, imagined and real, across cultures and professions. The second act strides across a geographical, political and imaginative landscape in four scenes, tugging and tying together threads that seem to connect and criss-cross over centuries. The third act in four scenes presents a special court with an eleven-member jury which listens to arguments and counter-arguments of various representatives. And the play ends, perhaps not unexpectedly, with a presidential declaration of a ‘state of emergency’ (p. 146).

In line with a tradition where the performance and politics of a powerful piece of drama must catch the conscience of the people, the play documents the possible fallouts over such a fantastic disappearance of a two-hundred-million strong community. For example, it triggers a frenzy to distribute their land and property, bakeries and biscuit factories, import and export businesses, shops and farms, as well as cattle ‘among the people’ (p. 17). However, conundrums follow as well: if the buffaloes, cows, sheep get allotted to a Dalit ‘pig-keeper’, then ‘traditions’ have to be respected that will not allow the upper castes to buy milk from the said pig-keeper (p. 19). Similarly, upper castes from both communities had ‘shared’ assembly seats over consecutive elections earlier. However, the disappearance of this minority community—enemies of the nation until yesterday—has reduced the significance of triangular and pentangular multi-cornered elections to ‘nothing’ (p. 69). The numerical majority of the Dalits, Adivasis and other backward classes is leading to a ‘ganging up’ against the upper castes. In fact, their ‘sheer numbers’ have emboldened them to talk of a Dalit prime ministerial candidate, a horrifyingly patent indicator of ‘Kalyug’ (p. 69).