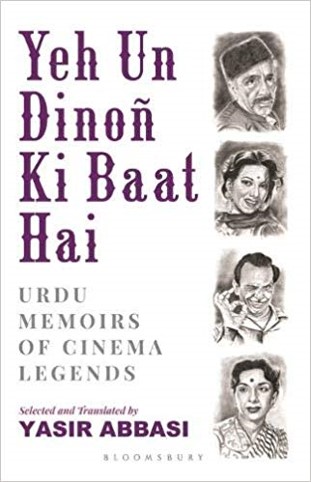 The major ingredient of the aura of Bombay Cinema is nostalgia. Films themselves satiate nostalgias for things and ways of living now lost, or never acquired. Nostalgia for rurality, small town sensibilities, the historical past, myths and fables are all important fodder for audience interest in films. But then, cinema of a time also becomes an archive of the contemporary—invoking nostalgia for itself. In cultural studies nostalgia is often theorized as a commodification of history and memory. Frederic Jameson (1991) characterizes nostalgia as a reconstruction of the past in terms of the concerns of the present—the attempt is to appropriate a past forever lost but remembered through the prism of time which has brought about generational change in fashion and ideology.
Yasir Abbasi’s Yeh Un Dinon ki Baat Hai: Urdu Memoirs of Cinema Legends—a translated collection of writings by Bollywood cinema legends published in Urdu film magazines—is nostalgia personified. The book first hits a reader with surprise—Urdu film magazines existed not so far back in history to have been so completely forgotten. Once we get over the surprise we can immerse ourselves in the book. The narratives are wrapped in nostalgia for a time when lead actors were not the only stars. This is the time when producers, lyricists, music directors and writers, and even technicians were publicly known and celebrated for their talent. When compared to today, not only were more departments of film-making represented in stardom but it appears reasonable to assert that many stars were also literary figures in their own right. The book also suggests that the part of the star persona of these figures was their image as thinking artists who cultivated literary interests.