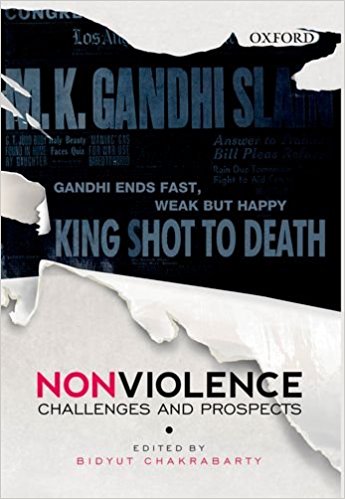 Bidyut Chakrabarty sees the mass uprisings of 2011 in West Asia as reconfirmation of the relevance of nonviolence. Barely three years after the exhilarating successes of the Arab Spring, however, nonviolence is far from the minds of the numerous factions engaged in seemingly interminable conflict for control of those troubled lands. Not only has the level of all-round violence spiralled to terrifying levels, but the most egregious of the feuding elements has adopted nothing less than ‘savagery’ as its political strategy. Reportedly driven by the ideological underpinning of Abu Bakr Naji’s The Management of Savagery, extreme violence is glorified, ‘softness’ is seen as the ‘ingredient of failure’.

One of the contributors to the volume under review, Dustin Ells Howes, observes that ‘the last three centuries of liberation movements can be understood as a long conversation about the potential and perils of violence in relation to freedom’.

He concludes that ‘while the human suffering violence brings is real and enduring, the political change violence brings is superficial’ and, hence, is not a sustainable strategy. His paper, however, seems to have been written well before the momentous happenings in West Asia. Examining nonviolent resistance in Iran from 2009 to 2012, Bernd Kaussler wonders why it did not succeed in bringing an end to the tyranny of the Islamic Republic, whereas movements in West Asia had done so in largely similar circumstances, little realizing how things would pan out there. One wishes that Non-Violence had been updated to carry at least one contribution touching on today’s conversation on violence in the context of developments in the Middle East, or that Chakrabarty’s otherwise excellent Introduction had brought the discussion au courant.

Leaving aside the existential dilemmas of that unfortunate region, this anthology succeeds adequately in its aim of acquainting the reader with the evolution and nature of nonviolence as an ideology and as a political strategy, with reproductions of seminal essays of Tolstoy, Thoreau and Gandhi himself, besides scholarly papers on the theoretical foundations of nonviolence. In attempting to demonstrate the relevance of nonviolence as an effective means of articulating protest, however, the book reveals the conceptualization of Gandhi, the apostle of nonviolence, to be largely redundant.

In his lengthy Introduction, Chakrabarty competently lays out the parameters of the discourse which he centres on ‘Gandhian non-violence’. He traces the influences on Gandhi’s thought and spells out his conceptualization of nonviolence: not merely a strategy for political mobilization, but ‘a philosophical principle seeking to guide humanity’. Nonviolence for Gandhi was not passive inaction, but positive action that is non-violent and applicable to all human endeavour. In Gandhi’s words, it is ‘the supreme virtue of the brave’, requiring ‘far greater bravery than swordsmanship’. A political response to colonial rule, Gandhi’s conception of nonviolence was equally a strategy for confronting social prejudices and exploitative practices. Listing nonviolent movements in India and abroad, Chakrabarty points out that as ‘a strategy drawing on human search for peace, stability and tranquility’, nonviolence served to mobilize populations across class, creed and caste.

But, as Chakrabarty goes on to elaborate in a separate essay about nonviolence as conceptualized by Gandhi and that other great exponent, Martin Luther King, Jr., their idea of nonviolence had an essential moral, or religious, core. While Gandhi developed his ideas from the religious traditions of ‘instinctively nonviolent’ Indians, King had to bring on board American Blacks who did not necessarily share a tradition of nonviolence. Hence, the Church was brought to the heart of his battle against racism: in King’s words, Christ furnished the spirit and motivation while Gandhi furnished the method.’ ‘Gandhi was probably the first person in history’, King declared, ‘to lift the love ethic of Jesus above mere interaction between individuals to a powerful and effective social force.’ To both Gandhi and King, nonviolent struggle was the weapon of the strong, not of the weak; its driving force was love, the panacea for all evils; understanding and friendship substituted animosity and ill-will toward the wrong-doer or the ‘enemy’. It is moot whether any of the more recent movements can meet these transcendental standards.

Non-Violence chronicles several resistance struggles in India, spearheaded by iconic leaders or common folk, which ostensibly qualify as successful nonviolent movements. Mohammad Raqib describes Ghaffar Khan’s Khudai Khidmatgar Movement of the 1930s in the North West Frontier as a popular movement whose main objectives were to win complete independence for India through nonviolent struggle, and reform the social, political and economic life of Pashtuns. Persuading his martial tribesmen about the futility of violent resistance, the visionary Khan marshalled the Khudai Khidmatgar to be an effective nonviolent force of more than a lakh whose activities raised the ire and apprehensions of the colonial administration. Though they rarely transgressed nonviolent tactics, the Khudai Khidmatgar were subjected to massive repression and Khan himself was repeatedly jailed. The movement petered out when the civil disobedience struggle was replaced by electoral politics, and it is scarcely remembered in the place of its origin.

David Hardiman observes that Independent India has largely ignored what Gandhi stood for. Western-style development became the model, with Gandhian work taken up in mere token form. The relatively more successful of Gandhi-inspired initiatives were Bhoodan and Gramdan, associated with veteran Gandhians Vinoba Bhave and Jayaprakash Narayan. Aimed at persuading landlords to gift their land for re-distribution to the landless, the movements had a significant effect in some states, but left no lasting impact. Another article on Jayaprakash Narayan, by Partha Nath Mukherji, an acolyte, details JP’s journey from Gramdan to Sampurna Kranti (total revolution) which brought Prime Minister Indira Gandhi to her knees. JP was a Gandhian personality, selfless and driven by a higher calling; but the author is hard put to define his historical legacy. His explanation that the lasting contribution of any social movement, particularly those of a transformatory nature, is the ‘residual deposit’ that it leaves in the collective memory and consciousness of society, is an apt summing up of most nonviolent struggles of the past.

The more contemporary resistance movements—Chipko and Narmada Bachao Andolan—represent people’s movements for equitable and participatory development. Ramachandra Guha details the context of the Chipko Andolan which brought commercial forestry to a halt in the Garhwal and Kumaon hills. Though the movement had leaders like Sunderlal Bahuguna and Chandiprasad Bhatt who exemplified the ‘highest traditions of Gandhian constructive work’ in their personal commitment and asceticism, Guha resists designating Chipko as ‘Gandhian’. Its nonviolent method was ‘an inspired and highly original response to forest felling’; rather than an ideological confrontation, it represented the villagers’ ‘fight for basic subsistence denied to them by the institutions and policies of the state’. Also on the Chipko movement, Vandana Shiva in a well-researched paper emphasizes the key role of women in indigenous forest management and ‘the fact that the history of Chipko is the history of the visions and actions of exceptionally courageous women’. The Chipko struggle, she says, was a struggle to recover ‘the invisible productivity of women’, their entitlements and rights to political spaces and sustained survival. In her paper on the Narmada Bachao Andolan, Smita Narula similarly characterizes the people’s movement against the Sardar Sarovar dam as symbolic of the discourse on human rights and development in India. In the words of Medha Patkar, the inspirational leader of the Andolan, ‘the state is expected to act in favour of the most disadvantaged communities and use the resources in such a way that the common good would really be achieved.’

A new form of Gandhianism represented by Anna Hazare’s movement, is portrayed in an interesting paper by Vinay Sitapati. He argues that though India’s rising new middle classes care little for Gandhian activism, Anna Hazare managed to draw them into his movement by using Gandhian techniques (though not ideology) to project urban middle class interests. In return for articulating their agenda, they provided the foot soldiers and manpower that Hazare lacked.

While the contemporary resistance movements covered in this book show that nonviolence can be an effective tool to articulate protest and gain public attention, the Gandhian content in these movements is largely limited to the personal styles of their leaders. As Bhiku Parekh points out in his essay, Gandhi’s was an intensely moralistic vision: ‘non-violence implied inner peace, being profoundly at ease with oneself’, and thereby with other human beings and one’s natural and social environment. Akeel Bilgrami too highlights the ‘integrity’ of Gandhi’s thought, in that his idea of nonviolence was ‘of a piece with the search for truth’. The political strategies that Gandhi devised, says Bilgrami, originated ‘from ideas that were very remote from politics’. To put it another way, true nonviolence requires nothing less than a Mahatma.