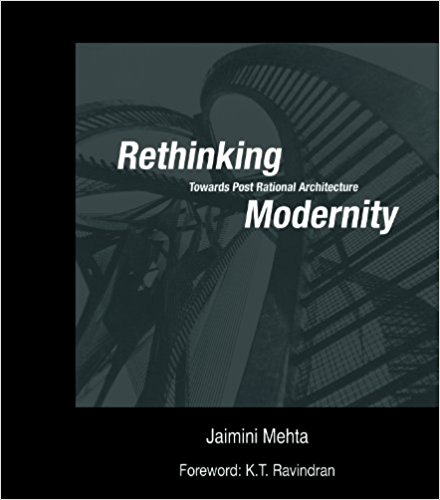 This is an intense book but then rarely does a book that indulges in architectural theory make itself so lucid and strong-footed. Setting the stage for declaring the emergence of Post-Rational Architecture, Jaimini Mehta eloquently traces the vocation’s transition over its recent two hundred and fifty year-old history. Why two and a half centuries? Mehta observes that the Age of Enlightenment set the ball rolling for cultural modernity in the 18th century and architecture can, by no means, be seen in isolation in reaction to this movement. The theme central to this book is not ‘modernity in architecture’ but a close examination of events which have slowly transformed modernity’s blandness and in fact sensitively adapted them to the various cultural milieus that architecture finds itself manifesting. Therefore, the ‘re’-thinking of modernity is in-evitable.

The author first identifies the problem that leads to the present state of architectural education—namely the severance of engineering from mainstream architecture. He sets a definite date that formally marks this fated event—the founding of the Ecole des Ponts et Chaussees by French architect and structural engineer Jean-Rodolphe Perronet in 1747. ‘Until then’, writes Mehta, ‘the term “Architect” implied both a builder, well-versed in the craft of construction and engineering, as well as an artist.’ Thereafter, the inseparable twins of building became long-lost cousins, estranged by academia. This ‘first crisis of confidence’, that few historians have deemed significant, led architecture into an ‘epistemological obstacle’ which was later addressed by a number of architectural historians and academicians who tried to create a unique position for architecture in society. Now that engineering was understood as something that dealt with number crunching and the tangible and finite components of the building while the architect was relegated to the visionary and aesthetic realm, it was time to render an academically supported creation to elevate the profession beyond its sheared role. Thus, the stage was set for the rise of the Rationalist movement. And it obviously doesn’t end there.

Much like his contemporary, Kenneth Frampton, Jaimini Mehta’s research is methodical, deploying plenty of epistemological and architectural jargon wherever necessary while drawing upon art history, philosophy, and social studies to support his findings that the Rational movement didn’t do enough to justify architecture’s broader role. And although seeds of dissatisfaction were sown throughout the Rationalist movement, the evolution of the Post-Rationalist emerged as a response to the dearth of context sensitivity and a ‘humane’ condition that the Rationalist movement failed to provide. Jaimini Mehta pivots this transition on the architectural genius of Louis Kahn. The author studied with Kahn and worked in his office being deeply influenced by Kahn’s ideology of architecture. Examining how philo-sophical threads were simultaneously develop-ing alongside Modernity’s massive impact on the architectural world, the author points out inade-quacies of the purely Rationalist approach towards Modernity. Citing references to the idea of ‘craft’ in building, he emphasizes the impor-tance of an architect’s knowledge of not just art but also technique and how the two were inherent in Kahn’s architecture. The author thus presents Kahn as the ‘first Post-Rational’ architect.

To assert his observations further, the author presents the works of two leading contemporary architects—Santiago Calatrava of Spain and Hiroshi Naito of Japan. Both are renowned and widely considered in the professional fraternity to be architects’ architects. Calatrava is an engineer and architect whose works are flamboyant, always attempting to diminish the distinction between an architect and an engineer’s role. Naito, on the other hand, is an architect and Professor of Civil Engineering at Tokyo University. Citing Calatrava’s kinetic forms as the extension of Rationality in Modernity’s palette, Mehta places him in the Post-Rationalist realm. Hiroshi Naito is more sympathetic to traditional crafts and context that calls upon the engineer to help create his works but with the pragmatism of a logical mind and the heart of an artist. According to Mehta, both these architects have shown, through their prolific creations, that Post-Rationalist architects straddle engineering and architecture together to transcend the Modernist separation of the two vocations.

As much as our world embraced modernity in architecture, it did so in just about everything. Architecture, unlike many other fine and applied arts, cannot be seen in isolation from society and in fact reflects the society’s aspirations deeply as our built environment resonates the values of taste, market forces and ambition. Buildings and cities are canvasses that last beyond several lifetimes and therefore perhaps best testify not only to the human condition of its time but also their transitions. This book speaks as much to architects as to art historians, philosophers and anthropologists. Mehta’s research is insightful, sharp and well illustrated with numerous photographs and drawings but most importantly, it urges architects to acknowledge, understand and further champion his idea for Rethinking Modernity through Post-Rational architecture.