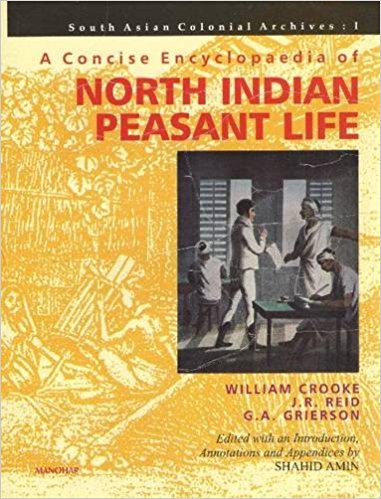 Since the beginning of colonial expansion in the late eighteenth century a wealth of material has been generated by colonial administration and scholars. This documentation has often formed the base material of the writings of future historians, and often provides us the only non-vernacular account of local practices and beliefs. It adds to the official information of the colonial record and enables historians to reconstruct agrarian relations and practices under consideration in their historical research. Three such texts from North Western Provinces and Awadh were written in the late 19th century soon after the annexation of the United Provinces and Awadh and form a part of the Encyclopaedia under review. Part one of the book includes one of the earliest accounts of peasant life, William Crooke’s Materials for a Rural and Agricultural Glossary in North Western Provinces and Oudh (1879) which provided a compendium of implements, soils, weights, measures and trading relations in agricultural and rural life of the region. It also influenced several other writings of the same nature like George Grierson’s Peasant Life in Bihar (1889).

The second part highlights how settlement reports provided an important insight into the agricultural systems of North India. It includes J.R. Reid’s ‘Materials on the Agricultural System’ from Azamgarh Settlement Report (1881) gives a concise picture of the seasonal cultivation of the area. The cultural aspects of rural life are represented in the third part of the book by G.A. Grierson’s Selections of Bhojpuri Dialect, Conversation and Songs (1889). These three selections are accompanied by a detailed Azamgarh Glossary in the fourth part of the book which can prove to be an important key for understanding the local culture of the region. Thus the importance of this book cannot be underestimated for historians of colonial North India.

The glossaries included in this volume are representative of the way in which colonial knowledge was constituted and systemized. To this extent Crooke’s glossary formed an important part of the core of colonial classification of local information and was followed and preceded by similar exercises in different regions of the country. Thus in the introduction to the volume, Shahid Amin writes that Crooke’s Glossary is not ‘just a welter of facts obeying no other rule but that of the English alphabet’. It follows a detailed plan and is a ‘pioneering systemisation of colonial knowledge of the everyday life of the Hindustani peasant, it neatly divides the rural realm into the field, household and workshop (p. 24)’. In what follows Amin unpacks the ideological assumptions behind the glossary which provide us with a critique of the framework promoted by these Glossaries. First, Amin ably demonstrates that Crooke’s glossary is unable to capture the changes within the local peasant society and culture. Rather it projects an image of a changeless peasant society which neglects the changes in the material and mental life of the peasants. It also ignores the changes in vocabulary of the peasants—the fact that they may have incorporated some English words into their own language in their interaction with the English. Second, Amin shows how these glossaries avoided the use of indigenous categories to describe rural life. By doing this the authors of these documents denied the peasant society and ideology its right to reclaim an autonomous space within the larger colonial system. But this flaw within the accounts also leads the authors to ignore the fluidity and flexibility within the peasant societies. It also ignores the caste, class and gender differences within Azamgarh society whose agricultural system has been captured in detail by Reid. For example the function of threshing rice by women is ignored by Reid in his exposition. Similarly the terms used by women out of wedlock to express their unhappiness with their marriage also shows the relative mobility that women enjoyed within the Bhojpuri society. Omissions such as these reflect the fact that these authors do not understand the real social and cultural dymanism of rural society. It is thus telling that the class and caste dimensions of the use of such terms are generally ignored. The only difference that these glossaries simplistically (and according to Amin rather mistakenly) recognize is the difference between terms used by Hindus and Muslims, thus projecting the idea of a homogeneous Hindu peasantry. This flaw is brought out well in the introduction to the book. Finally a third important point made by Amin is regarding the uses of the glossary in the last section of the introduction. Here he mainly points towards the ways in which historians of independent India have either totally adapted to colonial categories on the one hand or applied diametrically opposite ethnicist discourses (for example Suman’s Shabdavali) on the other hand. Both have a similarity in that they employ an essentialist and particularist idea of the categories of ‘agricultural’ or ‘rural’ which ‘leaves little room for the peasants dealings with their own superordinates or indeed with the outside world’ (p.44). In this sense both these views deny the peasants an agency in dealing with and transforming their own world.

The strength of Amin’s arguments lies in the detailed discursive analysis of the documents presented in this book. His introduction will go a long way in helping the researchers to use the glossaries in a critically analytical way. It raises some important issues about the nature of the colonial codification of local knowledge practices. Some issues important for the reader are however left unanswered. For example: why did Crooke engage with the peasant society in such a simplistic fashion? Is it because he was unaware of its nuances or because he chose to represent rural life in this way? How did Crooke’s Glossary fit in with his overall role and facilitate his administration in these provinces? Answers to these questions would have been easier to understand if the discursive analysis was accompanied with a better analysis of the larger colonial discourse which generated and used these glossaries.

But despite this weakness, both the introduction and the documents presented in this volume are a valuable contribution to the archives of any researcher on agrarian North India.

Archana Prasad is a Fellow at the Nehru Memorial Museum and Library, New Delhi.