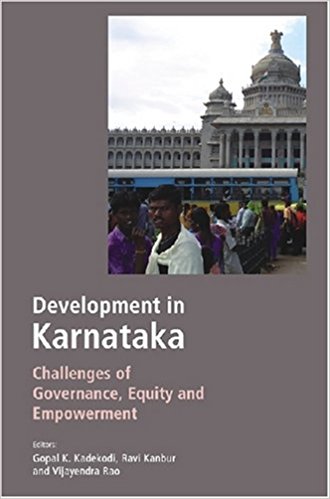 Karnataka has been above the national average in indicators of income, human development governance and many others. But it does shine better, if a road map is given as a quality reference document. What are the gaps that could gear up human development, improve literacy and education, change health care delivery systems, transform the social status of the deprived castes, and change gender equations? These and many more issues are addressed in the Karnataka Development Report by 80 subject specialists, coordinated by 20 experts from five research institutions—four from Bangalore, Indian Institute of Management, National Institute of Advanced Studies, Institution of Agricultural Technology, Institute for Social and Economic Change, and one from Dharwad, the Centre for Multi Disciplinary Development Research. The Planning Commission commissioned ISEC which provided the expertise and coordinated the work.

Despite Karnataka being called the ‘brain bank of India’ and the city of Bangalore the silicon valley of India, poverty and inequality in consumption persists. The state should become aware of the distributional implications which would worsen the already existing rich-poor divide. Economic growth shows high fluctuations, the tertiary sector has emerged as a major contributor to the state’s income and share of private investment in the state’s gross domestic product has been high: ‘An Overview of Karnataka’s Economy’ highlights the salient features and competitive performance of Karnataka’s economic growth.

‘The Dynamics of Karnataka’s Growth’ indicates that the state has moved from being a middle ranking Indian state to a ‘fast growing’ one. Although this shows its superior relative performance, regional imbalances and uneven process of urbanization are matters of concern. Innovative strategy approach of ‘proactive planning’ and emphasizing on institutional innovation for better policy planning and implementation are elaborated in chapter two, adding value to the Report.

Much of the regional imbalances are due to the variations in natural resources—land, forests, water and minerals. ‘Natural Resources in Karnataka’ provides useful information though the account does not pertain to the regional differences within the state.

The effective and efficient use of natural resources depends on the quality of population. The result of painstaking work can be seen in the presentation on demographic profile, population growth, literacy, regional and gender differences in the chapter on ‘Human Resources in Karnataka’. Details of many of the programmes which aim at school enrolment are also documented.

While discussing the economic infrastructure in Karnataka, the state compared with other states is using a few select indicators of infrastructure. Barring irrigation, railways and roads, Karnataka figures seventh among the 15 chosen states. The core relation coefficient between per capita state domestic product and indices of infrastructure indicates that there is need for infrastructure improvement for economic development. This calls for substantial investments.

Of the many issues discussed in the chapter on ‘Social Infrastructure in Karnataka’, education, training, health care, water supply and sanitation, housing and integrated child development services, the one on education stands out as it presents a wealth of data on input and output indicators. The data shows that regional, caste and gender disparities continue to persist. Future investments in education should concentrate more on integrating primary education with health and nutrition. Also, preparation of a database with long term-series data would help the government in planning for education.

There are many determinants to health infrastructures as is pointed out in the section on health. A way by which this has sought to be changed is by signing MOUs with NGOs to run PHCs. The section on housing is weak on data and also needs precise writing. The one on Water Supply and Sanitation talks of inadequate household latrines but does not talk of how many are operational and/or used for purposes for which they were built.

The section on Social Security Schemes lacks clarity of thought and presentation. The account of stages of SHGs is redundant and worse inaccurate. It would have been more appropriate to discuss the linkages/ lack of it between the schemes and SHGs. Also, sweeping statements like all rural development schemes are being implemented with the help of SHGs could have been avoided.

Financial Infrastructure mobilizes savings, makes available capital to those desirous of it, and accelerates the process of development. The chapter ‘Financial Infrastructure Banking, Capital Markets and Cooperatives’ comparing data with Tamil Nadu, Maharastra and Gujarat concludes that financial infrastructure in the state is good but there is scope for development. The chapter ‘Social Sector Development’ traces the socio-economic status of socially excluded groups—STs, SCs and Women. Adiyan, Bhil, Gond, Irular, Koya, Kuruba, Thoti, Yerva and other STs have been socially excluded from mainstream development as they are a minority, are heterogeneous with different social and cultural identities and are geographically spread. The sections on STs and SCs cover a range of issues—landlessness, indebtedness, poverty, atrocities and many more. Gender issues in development cover atrocities, employment status, conditions of urban women and women in government sector.

But the recommendations at the end of this section read as if they are hurriedly put. Also in the section on PRIs and political movement, reference is made only to the SCs whereas reservation in local self-governing bodies is for both SCs and STs as per the 73rd (and 74th) Amendments.

Many of the districts in Karnataka fall below the state average in per capita income, district-wise poverty ratio etc. One way by which backwardness and imbalances can be addressed is by taking into account resource transfers. Composite Index of Development of districts in Karnataka over four decades presented in ‘Regional Dimensions of Development in Karnataka’ is useful for developing policy interventions. Karnataka has introduced many innovative governance reforms—privatization of government activities, transparency in administration and procurements, Citizen’s Charters and more—which have significance on service delivery mechanisms. The chapter ‘Politics, Governance and Service Delivery in Karnataka’ throws light on a number of important issues and highlights the recent governance reforms in Karnataka—law simplification, e-governance, transparency in recruitment and transfers, Lokayukta. Despite this, the service delivery mechanisms suffer from bottlenecks. Those interested in urban sector development of Bengaluru Mahanagara Palike would find discussions from pp 460 to 466 useful. Karnataka has faced fiscal adversities but fortunately has strived out of it. It is one of the five states to adopt Fiscal Responsibility Act. ‘Karnataka State Finances’ clearly and succinctly traces various tax reform measures. Excise duties, stamp duties and registration fees, government expenditure and also urban and rural fiscal decentralization in the state are presented with élan.

‘Environment, Biodiversity, Climate Change and Urbanization’, issues of urban environment, its causes and effects are highlighted using many variables. The most productive eco-systems—Wetlands—which play a vital role in improving water quality and help in nutrient cycling are threatened by hydrologic alteration, pollution, direct deforestation, and have been diverted for non wetlands purposes. A useful section, hitherto less talked about, is the one on urbanization in Karnataka. Besides presenting the patterns and trends of urbanization, a detailed section on solid waste management, practices of it, waste flows in the city are enumerated.

The growth of agriculture has been responsible for the overall growth rate of states economy, despite droughts, and despite having only 20% of land under assured irrigation. ‘Agriculture and Allied Sectors’ discusses various points including the re-engineering of the sector and comes out with action points.

But the industrial sector too needs to be developed—setting up of a few more thermal plants, concentrating on marine products, stepping up institutional finance, closing of sick units are some ways of doing it. ‘Industrial Development in Karnataka’ recounts the history of industrialization, data on small scale, village and cottage industries like handloom, garments, sericulture and silk products, khadi, agrabathi are discussed.

In addition, Tourism, Entertainment and IT enabled services should be geared up. Karnataka’s share in total foreign tourists’ visits in India was 6.4 % and in respect of domestic tourists it was 3.62 % and is the 7th preferred state in case of domestic tourists and 8th preferred state in case of foreign states. If the state policy supports the growth of software industries with necessary infrastructure, it would increase flow of capital, profits, income and employment.

Vision 2020 of the Planning Commission has set out high targets of employment creation through development process (10 million job creations per year) but the state has certain constraints in achieving this. Visions for power, irrigation, road, service sector, external sector which provide good resource materials are recounted in the chapter on ‘Vision of Development in Karnataka’.

‘Policy Directions and Drivers for Future Development’ sums up the Report and gives useful directives—based on the analytical and critical discussions dealt in the earlier chapters. The strategic considerations, it is concluded, should focus on proactive planning, consultative and participative approach, public-private partnership, small industrial and agricultural clusters approach, encourage newly emerging sectors and shift from domestic to export orientation.

The Karnataka Development Report, with tables, figures, boxes and appendices is exhaustive and will be found useful by a wide range of stakeholders—policy makers, common persons, corporate planners, researchers or teachers, NGOs and citizen’s groups for whom it is intended. But the Report could have been streamlined to avoid overlapping of data (for e.g. on SCs and STs) and also discrepancy in analysis ( for e.g on MMR two different view points are given in two chapters). Mistakes that could have easily been avoided are: spelling Karnataka wrongly (Chapter heading of the first Chapter), mismatch between the text and heading (Boxes 6.3 and 6.10), casually mentioning the 74th Amendment to the Constitution, along with the 73rd Amendment, as resulting in the PR Act (p. 353).

Uniform writing cannot be expected in a Report of this magnitude with contributions from many experts, with the result some of the chapters are focused and well- written and some have superfluous sentences (p. 141 para 2, page 166). The eighth chapter on Political, Cultural and Social History of the State could have been placed at the beginning of the Report. In its tracing of history, the chapter has overlooked the contributions of the Diwans of Mysore.

Shashikala Sitaram has worked at Indian Institute of Management, Institute for Social and Economic Change and also with The World Bank and Asian Development Bank, DFID as a Consultant. She has written a number of reports and articles in international journals. She has a PhD in Development Studies from the University of Mysore.