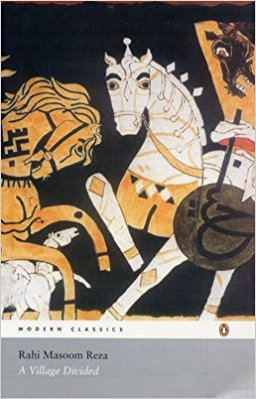 A Village Divided is a wonderful book, well worth spending money to buy and time to read. Rurially autobiographical, Rahi Masoom s Adha Gaon (1966) is a record of the life d times of his village in UP where Muslims d Hindus lived together in an accord which y has begun to seem mythical. Quite apart from the narrative flow is the change of pace of the book as a lifestyle of centuries revs into the unbelievably fast gears of Partition, communalism, and modern secular India. Adha Gaon is honest and compassionate. Gillian Wright’s translation of it was first published in 1994 as The Feuding Families of the Village of Gangauli, splendidly reviewed by Shahid Amin in Biblio (April 1995). A Village Divided is a revised translation. Even so, and iconoclastically, given the unwritten law that reprints and their cousins are not reviewed in full, here is a review. In spite of theories and workshops, the one thing translators agree upon is that there can be no incontrovertible rules for translation. There is always the possibility of freshness for the translator as well as for anyone interested in translation. Each text is unique, as is its translation. To see how one language gets transformed into another can be endlessly interesting since the translation is and isn’t the same as the original.

Yet reviewing a translation is so much easier when one is ignorant of the original language, but the work must be dealt as a translation if one knows the original as the target language (what an ugly term language’ is, as if translation were a e mission and not the refreshing Uenge it is). This is not always much fun. Ego gets in the way. One tends to think one could have done a better job on a word or passage. But having done a minuscule amount translation myself, I know it is exhausting. I admire energy and staying power of translators like Wright who have given us entire books. I am always grateful to them for making literature available to us non-polyglots.

Gillian Wright’s translation of Adha Gaon is faultless. Nothing jars, nothing leaves you wondering what a word or a phrase means. She an extremely useful glossary and prefatory notes on Shias, Muharram and its stages, and the variety of names, especially bewildering in chapter 2 but that too is explained.

Why then, at first, did it seem difficult to read? Why did it have nothing of the intelligent and interesting dialogue of B.R.Chopra’s Mahabharat, till now my only acquaintance with Rahi Masoom Reza? Was it the difference of medium and target audience?1 The first chapter of the original Hindi story, for instance, has the immediacy of the spoken word. ‘Par ek baat sun lijiye’ is addressed directly to the reader. Wright translates this as, ‘But I must say one thing more.’ If you translate that back into Hindi, it is likely to turn into, ‘Parantu main ek baat kehna chahata hun’, which is mote formal, more rehearsed than Reza’s original.

The Introduction,’ which occurs two chapters before the end, clarifies this issue. Reza is deeply distressed at the Jan Sangh’s saying that Muslims do not belong to India. (Adha Gaon was published in 1966.) The moving urgency and directness of Reza’s writing contrasts dramatically with the relaxed, sleepy opening chapter where the looming religious division gets a passing but pithy mention: ‘Recently the number of Gangauli dwellers has begun to decline and there are more and more Sunnis, Shias, and Hindus.’ Reza adds, ‘Main bahut pareshan hun! Wright has translated this as, ‘I am deeply worried,’ but ‘I am deeply distressed’ is closer to Reza’s feeling.

In the second paragraph of this chapter, Reza says, Aap soch rahe honge ki kahani ke beech mein yeh bhoomika kaisee! Main bhi yahi soch raha hun! Once again we have a direct address. The first sentence is mildly like a cliche. The second one changes that as the reader is drawn into the writer’s presence. It as if writer and reader were sitting face to face: one says, ‘I am thinking exactly that,’ the other responds with, ‘I’m wondering about this too.’ But Wright has dropped the second sentence altogether, converting the story teller into a writer. Vijay Nambisan has said recently that Indians are better at the spoken word than the written. Perhaps that is why we spend so much time on buses and trains listening to perfect strangers, or why one of us might talk of a couch loaded with clothes as a fatigued and fainting couch whereas an NRI writer has used ‘fainting couch’ with the precision of a furniture catalogue. I think, very humbly, that structures I of feeling are extremely difficult to grasp but perfect translations, if they exist, would include fully comprehended structures of feeling.

But after a bit, the translation seems like the original. And for readers, that is all that matters.

There is no date to the translator’s Introduction, no explanation why the book has revised or why it has been re-issued under another title. That it is a revised translation is in the small print in which publishing details are recorded. Perhaps, in view of the current academic interest in the making of books—much research on the matter is afoot, even in India—publishers will be kind enough to put all this information into a pre-Preface.

One hopes all those busy theorists of translation are working on a more elegant terminology.