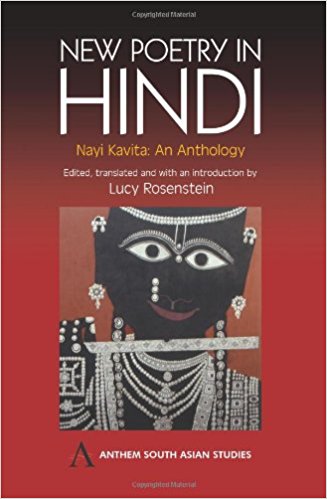 What do you do when faced with nothing much to quarrel about with a book under review? Concur. Quote. Applaud. Celebrate. Concurrence, however, breeds few words, and a lot of yawning space. Quibbling, on the other hand, might come to your rescue. New Poetry in Hindi offers both the paths. Lucy Rosenstein has produced a fine anthology of eleven modern—and modernist— Hindi poets. Her introduction to the ‘land­scape of Hindi verse’ is almost perfect—precise, largely unbiased, Touching on the major turning points in both poetry and poetics. As it is, modern Hindi is among the youngest of Indian languages and the life-story of its verse is just out a century-old. Yet, the twists and leaps idem in its ongoing match ate almost amazing—nourished, influenced, bruised, but rarely overawed by manifold sources, old and new, Indian and foreign. Lucy Rosenstein is, I think, right in seeing e flow of ‘New Poetry’ as ceaseless to date, n the multiplicity of modernist impulses the world over. Opening up in the late 1930s, under rubrics such as experimentalism, progressivism, ‘new poetry’ and various other mini-movements, the thrust for experimentation in themes, styles, poetic languages, etc. goes on. To some extent, Nirala had already covered a t of ground and laid out a few prototypical formations for the future generations.

Agyeya, after him, adds a lot of new edifices, and even if e fails to be a favourite of everyone of his successors, he seems to meet the challenges before a ‘great’ poet, as defined by him: ‘…is somebody who has a large output, who deve­lops throughout his life, who exerts significant influence over his contemporaries, and whose poetry stands the test of time’. There is no Hindi poet in the second half of the twentieth century who fits this definition of greatness closely than Agyeya, she adds (p. 22).

It is with this incisiveness, judgement and that Lucy Rosenstein brings out the salient features of men and women poets selected by her. In the polemical battleground, Gajanan Madhav Muktibodh is held up as ‘the’ icon, post-1960s. But it would only be fair to state that Muktibodh is inimitable, and though has plenty of ideological—Marxist-followers, he has influenced the debate, not as such. Fine-combing the post-Agyeya poets, one often meets with surprising Agyeya-traces in rhythm, word-play, thematic concerns. Moreover, Agyeya happens to be the one major poet in Hindi who escaped the British gallows after serving a few years in the condemned cells, underwent an M.N. Royist-Marxist phase, and has plenty in his oeuvre to show that he too espoused quite a few socio-political beliefs, lifelong.

In this bilingual anthology, Lucy Rosenstein has included four women poets—Shakunt Mathut, Kanta, Amrita Bharari, and Jyotsna Milan. ‘All anthologies of contemporary Hindi poetry have followed Agyeyas model of male dominance: only two women—Kirti Chaudhury and Shakunt Mathur—rub shoulders with the nineteen male poets in­cluded in his thtee famous Saptaks. ‘Revising their literary map’, she has located works by about twenty women poets in journals and magazines like Nayi Kavita and Kalpana, who’ ‘remain silent or perhaps even silenced.’

Even as one concurs with her on the ‘balancing’ act, it would seem that the post-1990s scene is different from the ones preceding it. Hindi has had a number of major short storytellers and novelists among its women writers, but it is only in the last 10-15 years that women have found their poetic voice. Some of them are truly significant ‘as practitio­ners of the art of poetry regardless of their sex’. Among the chosen four, Kanta was perhaps the most neglected, despite het exquisite craftsman­ship, and her explorations of the limits of utter loneliness, both as artist and as a person.

Lucy Rosensrein has also pointed to the ‘popular poets’ who command massive audiences in the Hindi world, but ‘who have been ignored by the elitist critics as have the women poets by the male-dominated literary establishment.’ Can one detect a ‘global’ pattern in this kind of ‘distributive (in) justice’, I wonder!

It may also be noted that this anthology of modern Hindi poetry is just one of the half-a-dozen or so produced so far in English. There might be more of such collections in some East European languages, but fewer Americans or Britishers have ventured into this field. Lucy Rosenstein has grown up in Sofia, Bulgaria, and as in the case of the majority of translators of Hindi poetry, English, perhaps, is not her native tongue. ‘Rachel Harrison was always there to answer my questions on the English idiom’, as she acknowledges. In which case, my quibbling over some of her Translations may sound a little alien, since English for me, too, is an ‘acquired’ language.

As stated early on, I do not have a ‘quarrel’, generally speaking. But Hindi being my first language, I have tried as a translator and often encountered difficulty in carrying over the nuances and the ‘natural rhythm’ of the variegated originals. A translation theorist will perhaps see this difficulty as a professional, normal hazard. Yet another look may still yield something unseen in the translated poem.

Shamsher Bahadur Singh, perhaps the most difficult to translate, makes poetry possible out of the smallest segment of a word. Often hi poem is not in the language or words, but ‘in the silence between words’ (Agyeya, p. 22), And yet, words come with their own genealogies. Two poems, ‘Seeing Dawn’ (Agyeya) and ‘Dawn’ (Shamsher) are interesting to compare in one sense. ‘Dawn’ here is for Usha, in Hindi carrying a deity-image, a cosmological back up evoking a pious veneration for ‘her’. In Agyeyas poem, Lucy Rosenstein brings out female image of ‘Usha’ with her ‘Bashful dawn-ray’ and ‘the conceited capricious lady. A bit too ‘clearly’, perhaps. In Shamsher’s ‘Dawn’, we miss a lot of the feminine touch, the sensuousness and the connotations of ‘Usha’. This poem is further complicated by the use of two more synonyms of dawn, which Lucy Rosenstein has of course negotiated with ‘early morning’ and ‘daybreak’.

In Raghuvir Sahay’s ‘Woman alone’, ‘Then Mohan went somewhere else/inside the seclusion of his illness’, makes the involuntary movement of Mohan in delirium much too deliberate—the note of wandering and finality of ‘aur kahin chala gaya’ slips out. This may also be due to the peculiar combination of verbs in Hindi, difficult to translate. In ‘Coffee House’ (Shakunt Mathur), ‘the abyss of fire is hard to tally with ‘ushma ki gaharai’. And ‘However deep, however black the colour of  the drink/it’s good’ may have been closer to the sense in ‘the deeper… the better’, etc.

However, hairsplitting of this kind could be endless, and ultimately pointless, for another alternative translation is also bound to generate a similar impulse in another reviewer. Lucy Rosenstein deserves celebratory applause for her mostly clear, direct, simple and often memorable lines of translation. Some of the poets have been translated (and published) for the first time, whereas in the case of others mentioned above (and Sarveshwar Dayal Saxena, Kunwar Narayan and Kedarnath Singh) the anthology offers additional or alternative versions. One hopes this book would attract wider than ever readership.