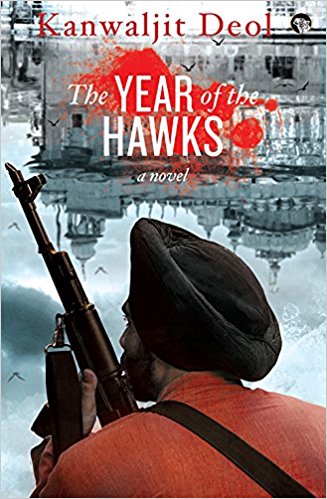 Kanwaljit Deol’s novel, The Year of the Hawks, grabs you by the throat and draws you panting into the lives of two adolescents engaged in the charming competition of who can touch his nose with his tongue and other such now forgotten pastimes of youth, unaware of the murky goings on in their village in the dead of night. Then they spot a dead body and report it to the police. That is the end of life as they knew it in their sleepy village, which, as it turns out, hardly sleeps and is forced to give its daughters as reluctant brides to militants. The two boys are caught between the pincers of gun wielding militants and the Punjab police using the same methods to fight those militants. Set in the turbulent years of the 1980s when Bhindranwale rose as a towering figure or threat depending on the vantage point you choose, Deol grapples with life in Punjab including the goings on inside the Golden Temple complex.

Deol sketches a detailed picture of the multifaceted world of different sects of the Sikhs, even of the different kinds of turbans they wear, the politics of power of the Akalis and the Congress and the small time beginnings of the man who came to adorn the covers of prestigious magazines photographed by some of the most famous photographers of our time. She places the media on the mat for nearly turning Bhindranwale into a hero, putting him on their covers to sell their magazines.

Bhindranwale appears as a character in the novel but Deol refuses to take us to his inner quarters preferring to let him stay at a reporter’s-notebook distance. His wiliness, his quick wit, his proclivity for responding to questions with questions of his own, are portrayed very well through her journalist character, Sikand.