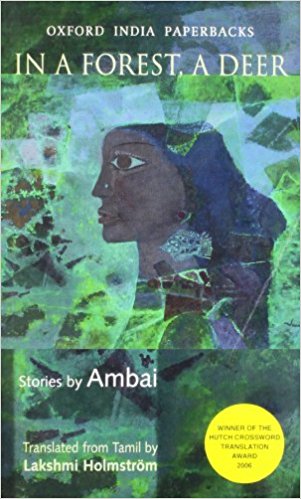 When I was told to review Ambai’s short stories I refused. Reviewing is tough for me for I am no verbally confident academic with one or more well-earned degrees and the terminology of criticism properly internalized. So all that I can do is to say whether I liked a book or not; and if I did so, to talk about it with a passion to any willing listener. And when I like it a bit too much I cannot and don’t like to write about it—for it is beyond me to give shape in words to the many thoughts that swirl inside me in the region of the heart and the eyes too mist every now and then. And I like Ambai. Almost all of Ambai’s fiction has been translated into English which is a good thing. She is without doubt one of the best short story writers in Tamil, male authors included. Not a profuse writer to be boxed into serially numbered tomes, she would have written an average of one and a half stories each year from the early seventies. Totally at home in the Tamil language and the Tamil cultural milieu, she is equally at home outside—‘Yaadum oore yavarum kelir’—harnessing its power to etch an ideal of transcending, universal humanism. Ambai is not an easy author to translate.