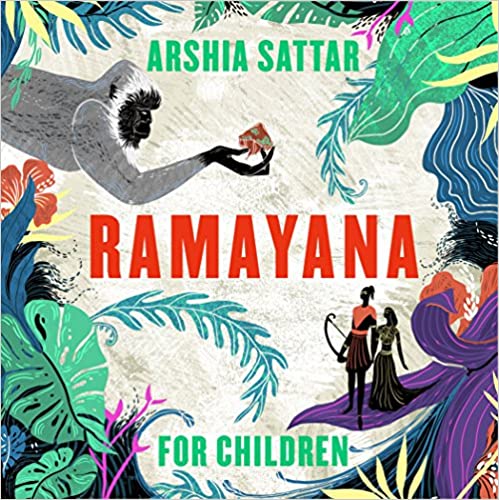 The Rama story has been around for a long time. It has been a part of people’s life and thought for generations in this country. An inspiration for both saints and savants over the ages, its longstanding and continued appeal for common folk too has been no less clear to many observers of this land. Its spread has also been documented by eminent scholars in modern times. About three decades ago, this was done in fascinating detail, with India as the background, by A.K. Ramanujan in his acclaimed dissertation Three Hundred Ramayanas. His contemporary, V. Raghavan, traced the story’s travel to and absorption in the cultures of other lands in his equally reputed book The Ramayana in Greater India. These learned works are probably deserving of greater general interest today. But simpler and direct retellings of the tale are also needed for contemporary audiences busy with the present tempo of life and without time or access to earlier accounts in original languages. The urge and need for retelling the story was no less recurrent in the centuries which followed the great poetic account of Valmiki, generally regarded as the first. Witness Kalidasa’s Raghuvamsam in Sanskrit, Kampan’s Iramavataram in Tamil and Tulsidasa’s Ramacaritmanas in eastern Hindi, to name just a few. In present times the modern media have also catered to this continued public interest. The story’s film, TV and comic versions have enjoyed sustained popularity. That they are part of a continuing earlier tradition is also clear from some not so new versions. The half-century old popular retelling in English by Shudha Mazumdar in memory of Mahatma Gandhi is a good example, as is its contemporary book, a comic pictorial presentation of the tale from a neighbour country in its own language, Bahasa Indonesia.

The book reviewed here comes in the same tradition. Its author is a well known Sanskrit scholar and commentator who had earlier translated the original Ramayana of Valmiki as a Penguin Classic, and also tales from the famous Kathasaritsagara. Here she presents for children the tale of Rama by Valmiki, which she has described as ‘my favourite’. A powerful and well-loved story, in her words, ‘it shows us how difficult it is to do the right thing when there are many choices before us. Most importantly, it is here that we see Rama as a human being, just like us. He laughs, he cries, he gets angry, he is sad and even lonely. Sometimes he acts in ways that confuse us and we ask if he was always right in what he did.’ As in the original tale, this is an aspect left for the reader to judge. This is a well told retelling. Addressed to children, it is worth a read even by others more adult. The language is simple, smooth and straightforward. Its tone is lively: tender, dramatic as well as heroic as needed in various descriptions. All are presented without circumlocution, and in a way largely faithful to the spirit of the original. There are numerous well known happenings in the story. For example, Rama’s sudden banishment to the forest on the eve of his coronation; the demonic abduction of his beloved wife Sita; the subsequent grief and tribulations he underwent with his brother; his finding of monkey allies; the final victory in battle with the demons; and the return home to rule as king. These and others are all nicely recounted for a present-day readership.

A famous series of incidents dwell on the relations between Rama and Sita, who loved each other deeply and suffered pitifully on their separation. In one of them, Rama hesitates to take her back after the A.N.D. Haksar RAMAYANA FOR CHILDREN By Arshia Sattar. Illustrated by Sonali Zohra Juggernaut, New Delhi, 2016, pp. 218, R499.00 battle till she had undergone a test by fire. To give some flavour of this retelling, here are the words in which the author describes Rama’s acceptance of his dear wife when she returns to him after the test, following his victory over the demons: ‘Rama took Sita’s hand and said to all the gods. “I already knew that Sita, daughter of Janaka, had been true. I never doubted her heart for a single moment. But she had to be proved innocent for the world to see—so that there will never be any suspicion about her character and her behaviour. She has always loved me and I have always loved her. She is as much a part of me as the rays of light are a part of the sun.”’ This quote would hopefully convey something of this retelling’s tenor and tone. These are also manifest in other descriptions, like Sita’s later banishment after some unfounded public gossip, her second return with her sons at a royal sacrifice, and her descent into mother earth. Space does not permit their further elaboration here, but all are part of a retelling which, though brought out declaredly for children, is also suited to more adult tastes and reading. This book is published in a nice and handy gift size form, and also has some eye-catching illustrations which add to the attractions of the story