Quiddity of a Country 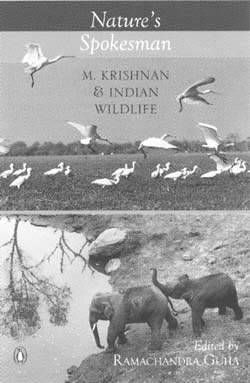 M.Krishnan (1912–1996) started writing in the nineteen thirties, when he was working in Madras and later at the durbar of the princely state of Sandur in Karnataka. After Independence, spurning an offer to be absorbed into the civil services, he decided to make a living through writing and photography; only then did he switch over to English. Quite a few of the writers of his generation were bilingual, having studied in the Tamil medium, including R.K.Narayan who had also started his writing career in Tamil. From the forties Krishnan started writing in English; he had a column in the Statesman which he kept up for nearly 46 years, the longest single column in India, one in the Illustrated Weekly titled The Southern Diary. Occasionally he wrote in magazines like Imprint and India Perspective. His articles in Tamil on natural history have been brought out as an anthology recently. He even wrote a novel in Tamil, the first Tamil thriller, he would say.

This book under review is a collection of the articles, 68 in all, Krishnan published from 1938-1996. (Earlier, The National Book Trust brought out a collection of 38 articles of Krishnan titled The Jungle and the Backyard ).The essays chosen cover a wide spectrum of natural history—mammal, birds, habitats, domesticated animals, indigenous cattle, dogs and conservation issues.