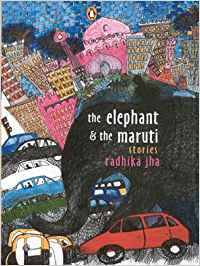 The Elephant and the Maruti is a collection of six stories, three set in Delhi, the other three se: in Bangalore, Puranduru, and Geneva. While diverse in their geographical locations the common underlying thread that links them all is the sense of smell, a theme that still seems a favourite with the author of the promising debut novel called, what else but, Smell. From the fragrant to the malodorous, smell seeps into each narrative and wafts out in pleasant and unpleas­ant ways to attack the olfactory nerves. From the very first story, ‘The Wedding’, where the protagonist Barrabundla whose “core of … seductiveness, lay in the complex cocktail of odours-that enveloped her…”, odours that threaten to swamp her husband-to-be as he “Sometimes caught the dry, powder)’ smell of her upper arms in the odour of ashes, her sweat, her skin, … smell of incense and overripe fruit… smell of wet campfire…”, till the final story, ‘The Cook’, where “Both the chef and the hunter relied on the sense of smell. Smell was the silent intimation of a creature’s soul, and also the traitor and enemy of its body”, Radhika Jha evokes smell in all its nuances and shades with finesse and style. But in her eagerness to set the smelly stage to the stories, Jha shapes the narratives at the expense of the story line and the reader is left wondering where each story is heading.

In ‘The Wedding’, the narrator, an old school friend of the protagonist Meenakshi, aka Barrabundla, is invited to the latter’s wedding in a farm house in Mehrauli. Much-in-sex Barra has decided to get married after all her flings but has last minute doubts that she overcomes in her inimitable style. The venue, the groom’s party, the bride, are all etched in clearly while we wait for the action to begin. But it is a futile wait for it never does, so much so that we are left wondering whether a page or at least a paragraph has gone missing in the story as it ends so abruptly.

‘The Hope’ deals with the city of Delhi as offering hope to the teeming millions, especially Biharis(!), that throng it to survive in the stark, bleak, hopeless lot that is theirs in this world. It is the underbelly seen through middle class eyes, or rather stories related to middle class ears. It is Delhi at its worst, a city that teaches humans to survive subhuman treatment — a point that is reprised in the title story of this book wherein the elephant and the maruti collide to set in motion forces that bring about desolation and despair to die parking ticket collector as well as the maruri-driving memsahib who refuses to pay him. It is a cruel city with no pity, no soul, and no salvation possible.

‘Beauty’’ is the story of a sexy schoolgirl who finds that her looks prove to be a disadvantage as schoolmates shy away from her in jealous)’ and teachers treat her with contemptuous lust. Her friends father flirts with her and her photogra­pher friend exploits her. It is a sexuality the young teen deals with first with arrogance, with fear in the middle and then with an eye to the main chance. But as with the other stories this too is left with the end hanging loosely.

‘Sleepers’ is the only story with a rural setting and it fulfills all out stereotyped expectations of an undeveloped, superstitious, filthy village coming to the boiling point of communal hatred and violence with the unexpected arrival of an IAS officer in its midst. It is different in that it is a Hindu-Christian clash, Hindu anger against the Christian community personified in the priest who educates the village children as the Govern­ment appointed teacher doesn’t turn up for work. The narrative is in the nature of reality reporting with a hand held camera following the IAS officer as he encounters the villagers in their own setting and catalyses the Christian priest to embark on a perilous act that leads to carnage and savagery. It is interesting that Radhika uses the term priest for the Christian one and pujari for the Hindu, but nevertheless gets the latter to invoke the Goddess Meenakshi as ‘Oh, fish-eyed one, why do you persist in ignoring your children?’!

The last story in the collection, ‘The Cook’, is as the name indicates the story of a chef who is turning senile and is slipping up in his cooking but who is helped out by his wife and a daughter who-do not let on that he is making mistakes but whom he mistakes as plotting against him to take over the restaurant. And if you are a foodie you might find fault with the recipes, I wouldn’t know, but if you are not, then you might find fault precisely in the lengthy descriptions of preparations! This is the only story that fulfills one’s need for a proper ending, that final touch that says goodbye, the story is over, time for the curtain to come down on the characters. It is also different in its foreign locale, Geneva, though the blurb at the back says Paris! It is also different in that it does not describe squalor, poverty, or exploitation. It is despair of another kind.

Radhika Jha has an eye for detail and a flair for putting it on paper but her present collection is one that leaves us sad, sad not just for a talent that has yet to tap its potential but for the sadness of the themes. It is remarkable that all the stories set. in India are full of chaos (physical or emotional), joyless and crowded. What has happened to the joy in what we see? Where is the pleasure of reading if stories only sketch details and trail off without closure? What has happened to good old fashioned yarns with or without twists in the tail?