Promoting the ‘Scientific Method’ in History 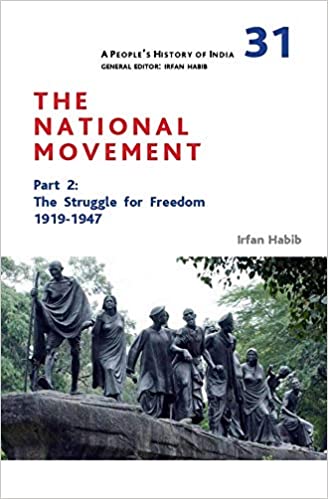 The work under review is the thirty-first volume in the People’s History of India textbook series edited by its author Irfan Habib himself. The publisher’s intention behind this series is the promotion of ‘scientific method in History, and resisting communal and chauvinistic interpretations’. Consistent with the style maintained in the series, this volume is primarily meant to be a survey of the unfolding of major political events at the national scale between 1919 and 1947. The intention to provide a short and lucid introduction to this complicated and immensely researched theme in Indian history, the nationalist movement, is praiseworthy. But such an endeavour must deal with a methodological problem at the outset: How to write a history of the nationalist movement from a non-nationalist perspective? To my mind, any non-nationalist historiographical approach must inherently be critical, at least of certain aspects, of the nationalist perspective. Irfan Habib has responded to this problem by attempting an objective and non-partisan assessment of the nationalist movement. The author claims to do justice to various streams of Indian politics even though MK Gandhi and the Indian National Congress dominate the text. I am not arguing for an equal distribution of textual space to all streams of Indian politics which, in any case, would be methodologically incorrect. Rather, I want to make two seemingly obvious points which often crossed my mind while reading this book..

[1] . The note on Bhagat Singh at the end of the second chapter is a good summary which, unfortunately removed from the main narrative in the chapter, serves to obfuscate his polemical role and critical influence on the Indian anti-colonial politics in the late 1920s.