A Record in Perspective 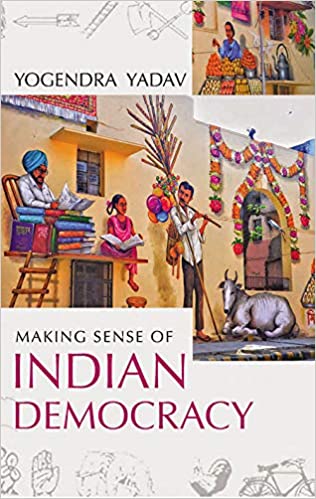 Yogendra Yadav’s voice has a familiar, unruffled and calm quality to it even as it has pronounced on the turbulent ructions of Indian politics. That same calm, unruffled quality can be heard speaking through these many pages of this  voluminous book that combines more than twenty years of his writing on Indian democracy as he attempts to make sense of it.

Yadav’s many preoccupations surface with regularity as one reads through these pages. He has always been a critic of the Congress from the vantage point of a socialist in India defined and carved out by the likes of Ram Manohar Lohia and Jay Prakash Narayan. Remarkably India has never seemed to be able to throw up a clear, credible socialist/social democratic party, decisively to the Centre, Left of the political spectrum. This could also be mirrored by the fact that apart from the fleeting presence of the Swatantra Party, India has never had a clear, credible conservative political party of the Centre-Right.

Perhaps the emergence of these possibilities has always been overshadowed by the omnipresence of the Congress system on which Yadav has much to say in this book. The Congress system has always borne within itself the pregnant possibilities of such Right Wing and Left Wing political tendencies. When the Congress system in its demise birthed these Centre-Right and Centre-Left political positions, the results have been overwhelming in the case of the Centre-Right and underwhelming in the case of the Centre-Left. As far as the Centre-Left position was concerned it was perhaps a case of being still born, stifled and strangulated by the adverse fumes of the Congress created market reforms and its many compromises with secularism. But the birth of the Right Wing BJP from the political space created by the shrinking Congress system is really what has grown exponentially to now straddle, colossus-like, the Indian political firmament. The immense implications of this development do not get much mention in Yadav’s book as a whole which might reveal that even to as astute an observer of Indian politics as Yadav, the developments of the last six years were not quite so obvious when these writings were done.