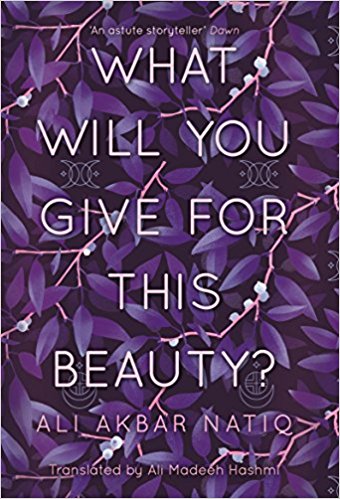 In his translated collection of short stories What Will You Give for This Beauty?, the Urdu poet, novelist and short story writer, Ali Akbar Natiq presents us with twelve stunning tales of lives shot through with heartrending cruelty, deprivation and injustice, but not without moments of genuine resistance and hope. Although never didactic, Natiq’s stories are expressly concerned with the plight of the downtrodden and the many forms that human cruelty can assume.

Much like Manto’s fiction, the stories in this collection are characterized by a sparse, precise language and the deft use of irony, and are peopled by a diverse array of characters: out-of-luck acrobats and bad-tempered barbers, malevolent maulvis and self-serving landlords, distraught pimps and prostitutes hoping for a better life for their children, in addition to a dog that seems to have a mind of its own.

But if Manto’s work is primarily set in urban spaces, all except one of the short stories in this collection take place in Pakistan’s rural Punjab and are skilfully woven in with the vagaries of the terrain and climate of the region as well as its deep-set tradition of oral storytelling. In fact, two of the stories, ‘Jeera’s Departure’ and ‘Pandokey’, feature characters who are recognized storytellers in their communities.

Published by Oxford University Press in 2012, the original collection in Urdu was named after the story ‘Qaim Deen’, and the title of the English translation borrows the question addressed to the eponymous character in the opening line of the story (‘So tell me, what will you give for this beauty?’), thereby maintaining its centrality to the collection. Indeed, ‘Qaim Deen’ epitomizes Natiq’s sustained preoccupation with societal injustice and the imperatives of human survival. It also highlights his understanding of Punjab’s distinctive identity as a region and its unique position in Indo-Pakistan relations, particularly as he reveals the continued paradoxical porosity of the border separating the two sparring countries, with the protagonist illegally crossing the frontier to steal cattle from Indian Punjab.

‘The Share’, which is the fourth story of the collection, deals explicitly with how the lives of ordinary Punjabis, both Muslim and Sikh, were ripped apart by Partition, bringing in its wake an agonizing recalibration of love and loyalties. The presence of a Partition tale in this contemporary collection of short stories echoes William Dalrymple’s observation that  ‘Partition is central to modern identity in the Indian subcontinent, as the Holocaust is to identity among Jews, branded painfully onto the regional consciousness by memories of almost unimaginable violence.’

While most of the stories in this collection have a male protagonist and the secondary characters too are predominantly male, women are no less crucial to Natiq’s exploration of human suffering. A particularly poignant example of intertwined male and female marginality can be found in ‘Qaim Deen’ where the ‘insane’ protagonist is kept chained to a tree by his son and the daughter-in-law is assigned the responsibility of attending to his basic needs.  The matter-of-fact tone adopted by the narrator accentuates society’s indifference towards the respective suffering and degradation of the two characters: ‘His daughter-in-law, who was also his niece, would set his food in front of him twice a day. If anyone else went near him, he wouldn’t eat. She cleaned his filth as well—it was part of her duties.’ Natiq’s concern with society’s mistreatment of women and the mentally challenged is apparent also in the story ‘Jodhpur’s End’ in which the protagonist, nicknamed ‘Ghafoora the Dimwit’, is mercilessly bullied by his fellow villagers, before being spurred into violent action by his wife, the feisty Kareeman, who herself was browbeaten into marrying him.

In What Will You Give for This Beauty? Natiq paints an essentially bleak and an often violent world. ‘A Mason’s Hand’, the final and arguably most pessimistic story of the collection, charts the terrifying conclusion to a Punjabi mason’s journey to Saudi Arabia, undertaken in the hope of improving his and his father’s lot. The story’s ending seems to suggest that dreaming of a better life is not only futile, but is also profoundly dangerous. However, and it is important to point this out, Natiq’s artistic vision does not preclude the possibility of joy: the story ‘Achoo the Acrobat’, for instance, underscores the human capacity for empathy and reconciliation. Moreover, humour is one of the most striking aspects of this collection. Natiq’s skill at writing convincing dialogue, in particular, allows him to bring to the fore his characters’ comical arrogance, blatant bad faith and penchant for hyperbole. Consider, for example, Jeera’s paean to a cow in the opening short story of the collection: ‘What can I tell you, that cow is a wonder. God knows, I’ve never seen such a huge animal. She has udders this big (holding his arms wide apart), like saucers, and she’s taller than two men standing on top of each other. Her colour would put the prettiest woman to shame. I’m convinced that this was the animal the Israelites were ordered to sacrifice. Bhai Abdullah, this animal outweighs all others.’

Deeply rooted in historical realities yet timeless, Ali Akbar Natiq’s powerful short stories possess a fable-like quality: they will speak to, touch and amuse readers far beyond his native Punjab for many years to come.

Maryam Mirza is the author of Intimate Class Acts: Friendship and Desire in Indian and Pakistani Women’s Fiction and is currently a BeIPD-COFUND Postdoctoral Research Fellow at the University of Liege.