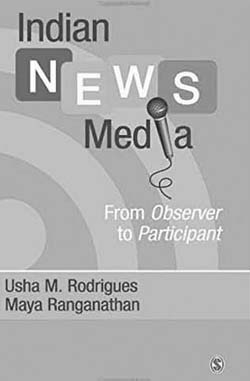 The book provides interesting insights into key developments that have in¬formed and configured the Indian news media in recent times. As the intro¬duction makes clear, much of the discussion is in the backdrop of globalization and its impact on the Indian media, in particular, the news media. However, in using the neoliberal framework as a central optic from which to centrifuge the state of the news media, many other frames like those of the communalization of news, shifts in policy and regulation to accommodate the changed political economy of news production and news consumption for instance, are rendered less visible though they have been both pow¬erful and pervasive.

The authors have done well to point out to the lack of choices avail¬able to an Indian audience despite the seem¬ing boom in the media sector; the fact that there is no real diversity and plurality of con¬tent in the sense of Mouffe an asterik where adequate attention is paid to question of power and exclusion in the public sphere. However, this early elaboration is not sub¬stantiated in the chapters that follow.

In chapter 2, Ranganathan succinctly argues the shift in the role of news media from ‘an observer to a participant’, which is resonant of the subtitle of the book. The point is well taken and encapsulates perhaps one of the most decisive shifts that can be attributed to the entry of private television in India. This she articulates tidily by giving the example of Sun TV. What follows is a political economy of a colossal media em¬pire, its ownership by one of the most pow¬erful political families of South India, point¬ing to an unprecedented media-politics nexus in Tamil Nadu, but with ‘ramification of the local going global and the global becoming glocal’ (p. 36). The chapter gives a detailed account of how the Sun network’s party af¬filiation was most tangibly felt during elec¬tions, citing the State Assembly elections from 1996 to 2001, 2006 and 2011, high¬lighting the role of media in electoral politics. The listing of ‘political television chan¬nels’ is a useful mapping exercise, one that should be of value to the growing scholarly interest on the subject.
The next chapter again by Ranganathan addresses a different concern, one having to do with media practice and ethics and the state of journalism in India today. The ex¬amples of the Radia tapes and the Zee extor¬tion case are cited and predictably so. How¬ever, what is of greater purchase is the delv¬ing into the history of sting operations in India, tracing it to the ‘emergency years’ (pp. 66–68) pointing to the slow but steady de¬cline in journalism, providing the necessary contextualization to such a discussion. The two exposés by the Indian Express, namely the 1981 exposé by Ashwini Sarin on hu¬man trafficking and the other on the torture meted out in Tihar Jail, offer a critical re¬valuation of sting operations. The author rightly points out to the unconventional methods adopted by the reporters to unearth these scams and knits the argument with what it means to practice ‘investigative jour¬nalism’. The discussion on the evolution of news forms aligning with technological leaps that transformed the nature of news gather¬ing provides valuable insights into the chang¬ing meaning of both sting operations and investigative journalism and its larger replace¬ment by soft, entertainmentalized version of news that suited its capitalist owners. Finally, the Tehelka series of sting operations cited— from the match fixing scandal to MPs mis¬using MPLADS funds to Operation West End raise some tough questions on the eth¬ics of using immoral means to exact infor¬mation in public interest. This complex de¬bate is by no means settled but surely well articulated by Ranganathan.
Rodrigues addresses the old question of terror. The chapter gives a background of the 24X7 reporting of conflict to what came to be known as the ‘CNN Effect’ recalling how the 1991 Persian Gulf War was the first tele¬vised war and a decade later in 2002, Godhra became the first live communal conflict in India (p. 102). However, in investing too much on the technology of live reporting of terror and the on-the-ground information that it provided to the terrorists as analyses of their phone conversations later revealed leading to a heated debate on media regula¬tion, the politics of a war-mongering media that practices a rabid version of jingoistic nationalism remains unaddressed. The point about the Mumbai terror attacks becoming a televised spectacle could be problematized beyond the TRP logic, to raise important questions on media discourses and represen¬tation of minorities (the Muslims here) for instance.
The chapter on paid news provides in¬teresting insights into the murkier aspects of the media business, the way the big corporates have begun to dictate terms to the editorial and why we must critically look into the thickening media-business-politics nexus. Argued from the position of ethical principles of journalism it does well to go into the history of ‘Paid News’ in India, giv¬ing much space to how the corrupt practice was first articulated and debated in the 2009 General elections with the PCI coming up with a report to nip this ‘deception’ in the bud. That of course has not happened to date. Several other examples of paid news and cor¬porate fraud in media are discussed in the course of the chapter, eventually framing the discussion from the lens of the ‘fourth estate’.
From paid news to media coverage of Anna’s movement, one has to struggle to find a thematic or substantive link. That said, the chapter sketches out the initial stages of the Anna campaign in great many details while trying to demonstrate media’s role in its me¬teoric success. Again, this could have been used as an opportunity to critically analyse the relationship between media and social movements as also the shifting dynamics of this relationship by analysing media’s role in the making and unmaking of social move¬ments on diverse issues from environment to identity politics.
The book will be useful to students of media studies.