Poems Spinning Through Time and Space 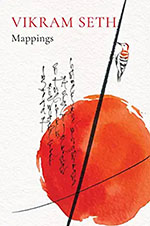 TS Eliot wrote in his essay The Three Provincialities (1922): ‘True literature has something which can be appreciated by intelligent foreigners who have a reading knowledge of the language, and also something which can only be understood by the particular people living in the same place as the author.’ Eliot goes on to mention how writers should be able to disturb the provincialism of not only a particular time but also a particular place. Vikram Seth’s poetry sets out to follow Eliot somewhat on this path. The new editions that have been brought out by Speaking Tiger are a collector’s delight as they bring together nearly all of his books of poetry right from his first collection of poetry titled Mappings. Written when he was in his twenties, Seth has mentioned in his introduction to the book (1994 edition) that he stood outside the ‘circle’ being from an Economics background and not an English one. It was a struggle to get his first book published and he ended up typesetting and publishing it himself, and later on Writers Workshop published it in 1981. He goes on to talk about the changes he made subsequently to a few of his poems from this book as he found them ‘callow’. What he also admits to is how authors should be forbidden to tamper with their works later on. Every work that one comes out with has been written in a specific time period and mind frame and it is not necessary that on revisiting one’s works years later, one would feel the same way about it. In the poem titled Mappings, Seth takes on this theme beautifully and says—

My mappings of these selves—despondent, witty,

Calm and uncalm, lost in self-doubt or pity…

All are still here, the old familiar faces.
—From Mappings

This brings us to the role of memory in literature, and how it holds an important place in Vikram Seth’s works. The review will try to limit its response only to his books of poetry and one observes how narration that a memory seeks is not limited only to prose. This narrative quality is difficult to miss in Seth’s poems. He grew up in India, later on was a student at Oxford, Stanford, and then studied at the Nanjing University, China. His poetry has elements from all of these places and they come together to create a symphony. Years later when you sit down to read all of his works tracing his journeys from his first book published in 1980 to the one published in 2011—one realizes how the voice has altered/adapted to the different ages and environments which an individual has gone through.

Three Chinese Poets is a collection of translated poems by Seth of the three Tang dynasty poets—Wang Wei, Li Bai and Du Fu.  Seth mentions in his introduction to this book how his idea of translation is to try not to compromise on the meanings of the original poems, but he realizes the loss of words and expressions that do not slip from one language into another and how in poetry, ‘…the exigencies of form leave less scope for choice and manoeuvre.’