Dispatches from an Eventful Life 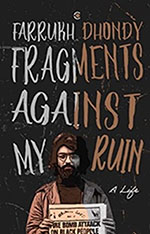 Farrukh Dhondy has worn several hats as a writer, journalist, activist, screenwriter, broadcaster and is something of a literary celebrity. His is therefore the kind of autobiography one expects to be peppered with fascinating anecdotes and lurid confessions. But, perhaps as the title Fragments Against My Ruin—taken from The Waste Land—suggests, one has to be content with fragments and fleeting glimpses of the world around its author instead of a comprehensive account.

Growing up in a Parsi family in post-Partition India, Dhondy spent his childhood in Poona, Bombay, Madras and Assam—for varying spans of time—depending on his colonel father’s posting. Childhood adventures, escapades and encounters occupy the first few chapters. The author vividly recollects his school lessons and curiosity around sex and expletives during his adolescent years. The transition into youth is marked by a predictable restiveness and ambition to get away from a ‘town too small’, although Dhondy fondly recalls his friendships and early impressions of ‘love’. It was at his college in Poona that Dhondy met his partner Mala Sen, a well-known activist and writer of Bandit Queen fame. Interestingly, the chapters that follow the account of Dhondy’s passage to England have very little to say about his family back home in India.