Plurarity and Tradition Under Pressure 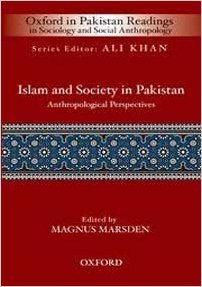 I slam and Society in Pakistan: Anthropological Perspectives is a collection of 15 ethnographic essays, edited by Magnus Marsden, and brought out as part of the series Oxford in Pakistan Readings in Sociology and Social Anthropology. Although the chapters are collated from different journals and edited books and written over a period of 15 years, their publication in this volume is timely and significant. At a time when Pakistan has emerged as a frontline state in the ‘war against terror’ and stereotypes about Muslims and their radicalization abound in the western media, this book draws the readers’ attention to the cultural heterogeneity of Muslim life in Pakistan and cautions against the use of sweeping generalizations and homogenizing categories. While the purpose is to explore how Pakistanis from different social, linguistic and ethnic backgrounds negotiate multiple and intersecting identities in the context of the dominant national narrative of ‘being Muslim’, the ethnographic studies, when read together, also provide a lucid picture of the faultlines among Pakistan’s Muslims and the causes for escalating violence in recent years.

For the country’s Muslims, who make up 98% of the population, the construction of a national identity and culture is linked closely to the religion they follow. Yet, the studies, based in different provinces of Pakistan and in diverse social settings, reveal that local traditions, customs and beliefs influence how people perceive and practise religion, and this has led to considerable diversity and complexity in the practise of Islamic tradition in contemporary Pakistan. However, each study, from Balochistan to Gilgit notes that the 1979 Islamization programme initiated by General Zia-ul Haq, was a watershed moment in the country’s history vis-a-vis practices of pluralism and coexistence. It exacerbated tensions and friction between different sects and sub-groups on ‘who is a true Muslim’ and ‘what is pure Islam’. The chapters wrestle with these questions even as they address western stereotypes about Pakistan’s Muslims.