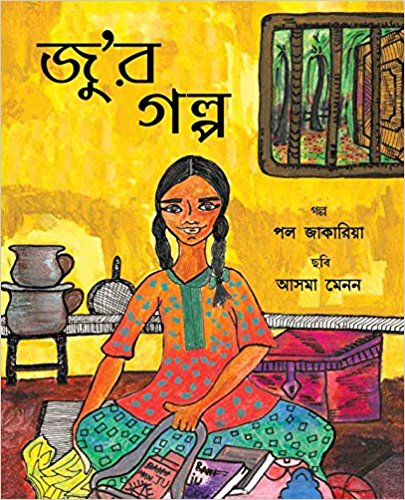 The latest in Tulika’s picture book series in multiple languages is Ju’s Story, well-known Malayalam novelist and columnist Paul Zacharia’s warm tale that captures the hidden riches that gild the life of a schoolgirl in an undescribed corner in Kerala. Asma Menon’s lush illustrations that accompany the story reveal a setting vivid with colourful layers of meaning. The girl at the centre of the story has a name with no identifiable religious or cultural markers. Ju’s tailor-father dies when she is a year old leaving her mother, a domestic worker, to her own devices. Any single-parent household brings with it tentative moments that arise from the absence of a loved parent and therefore, particularly in this case, curtailed material possibilities. The inventive mother embellishes her daughter’s life by providing her discarded and unwanted keepsakes from the homes she visits.

These became valuable gifts, almost like treasured secrets from someone else’s life, and imbue Ju’s hand-me-down routine with a dash of glory.

Once in Ju’s possession, the keepsakes become something more than discarded objects. From being old and unwanted, they become new and cherished. Ju is nothing less than an alchemist in her ability to transform them into revered and special belongings. In the hands of a sensitive writer like Zacharia, the story of simple discovery becomes a moving experience. Menon’s strong and vibrant colours suggest empowerment.