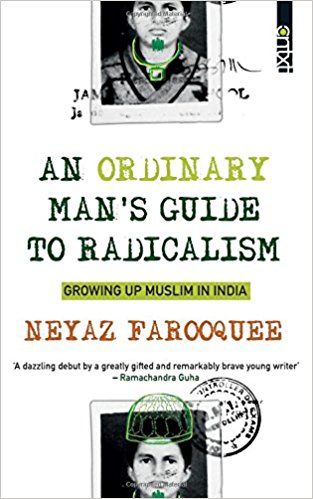 Neyaz Farooquee’s memoir An Ordinary Man’s Guide to Radicalism:Growing up Muslim in India has raised the all-time charged question of identity Indian Muslims have been grappling with. This is basically a tale of an ordinary Muslim youth who migrated from Bihar’s Gopalganj district and settled in a ‘Muslim ghetto’ called Batla House in Jamia Nagar, a locality behind Jamia Millia Islamia, New Delhi. He has documented his stories in the backdrop of the infamous Batla House encounter (widely believed to be fake), which took place in 2008, just 200 meters away from his residence. Through his stories, personal as well as political, he has recounted how Muslim youths of the area (and students of the University: Jamia Millia Islamia) in particular and of the country in general were put on trial to prove their patriotism in the post-encounter days. After the prologue, he starts with taking back the reader—through his first chapter named ‘A Solitary Exodus’—to his village in Bihar sharing the thrilling as well as tearful story of his migration to Delhi (like many youth). But in the subsequent chapters—along with painting pictures of his college-days with many anecdotes in between—he has more or less hovered around the encounter questioning its credibility. Also, while sketching the picture of the Jamia Nagar ghetto together with the University, he laments the frenzy created thereafter against Muslims by the anti-minority media, through its hysterical reportage. Farooquee has also underlined the suspicious series of arrests (or abductions) of Muslim youths made in post-encounter days. Besides, he has significantly illustrated the mental turmoil the students of Jamia went through in the aftermath of the encounter, after the entire University was alleged to be a den of terrorists. ‘In the days following the encounter, there was an information deluge from newspapers, TV, the internet, neighbours, friends and flying rumors. Though morning after morning, the newspapers appeared to all say the same thing, a close reading revealed wild contradictions, almost as if the reports were about different incidents’ (p. 105).

‘When skeptics pointed out that the dead men had all presented authentic documents for SIM-card verification, the police responded saying they had been overconfident, implying that the terrorists had disguised themselves as Normal Human Beings’ (p. 108). Thus, the police, in one stroke, brought every youth in Jamia Nagar under the scanner of suspicion. The police dubbed everyone in the area a ‘Suspected Terrorist’. In one chapter named ‘Like a Normal Human Being’, the author’s trauma can be felt when he says he and many other students soon had become educated orphans. He and everyone was regarded as ‘Disguised as Normal Human Beings’ despite many of them being clean-shaven, smart, confident and tech savvy (p. 126).