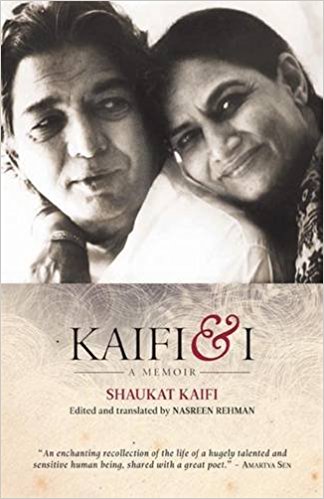 It was all alone that Id started towards the
goal
People kept pouring in and it swelled into a
caravan.

She has lived through turbulent times. She has seen the country fight for and secure Independence. She was associated with the Progressive Writers Movement (founded in 1936) and the Indian Peoples Theatre Association (set up in 1942). She acted in scores of IPTA productions and in films like Umrao Jaan (1981) and Bazaar (1982). In short, she is a career woman who is able not only to equal men but even to outstrip them in fields considered male preserves. She is the Hyderabadborn Shaukat Kaifi.

Charlotte and Emily Bronte represented women in novels which are more emotionally mature than any written by their contemporary men. When it comes to acting in theatre and films, one can say the same about Shaukat. Highly versatile, she had the ability to weld instruction and entertainment and the skill required for the production of a firstrate play.

This book is much more than the life of a hugely talented woman. It is family history, with the figure of Kaifi Azmi looming large. He was a leading Urdu poet, bold and outspoken. He sang of the joys and pains of the peasant and the mill worker. Without false modesty, he was realistic about his work and himself. With his head held high and his voice commanding respect and attention, he doggedly fought for many causes. A quintessential Communist, he exposed pretences, weighed everything anew and voiced human sufferings and aspirations. He not only hated oppression but also convention; hence, he bequeathed to his family a radical and eclectic inheritance.