Pages From the Theatre of Life 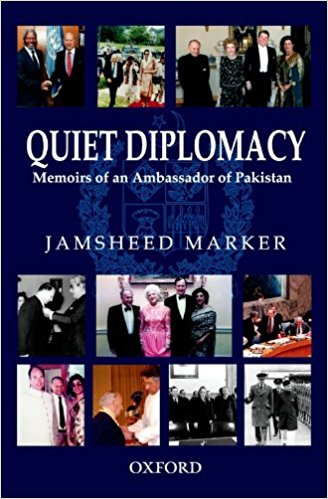 When a man has spent as long as Jamsheed Marker did at the highest levels of diplomacyhe was Ambassador of Pakistan in ten countries with another nine concurrent accreditationsthe memoirs are bound to be of considerable interest. The author brings much erudition and a felicitous writing skill to the task aided by his familiarity with French, German and Russian apart from English and his native languages. Markers remarkable diplomatic career placed him, in the words of Prince von Bulow, in a first class stall seat at the theatre of life. From that vantage position, he shares with the reader his professional experiences regarding unfolding events he was witness to, laced with nuggets regarding high personages. Being a Parsee, he was Pakistans non-Muslim face to the world. But history plays strange tricks. In an ironic coincidence, he was nominated by the UN Secretary General, post-retirement from the service to his nation, to conduct the East Timor referendum which resulted in its secession from a Muslim country!

Stanley Wolpert notes in his Foreword that Marker is always discreet in his criticism of his nations leadership. This is true also of colleaguesPakistani and diplomaticsuggesting an innate aversion to have anything but a good word for everyone. Splattered throughout the book is praise for one and all who came into contact winning, at the very least, an accolade as a dear or close friend. The Swiss Ambassador with whom Marker had served in Berlin, for example, finds no mention in that chapter and yet makes a solitary and passing walk-on appearance in a subsequent assignment in Ireland as a close friend.