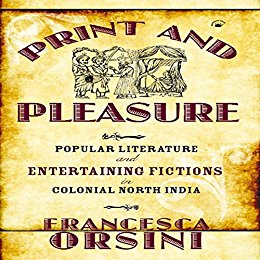 Following the publication of her ambitious doctoral book The Hindi Public Sphere in 2002, Francesca Orsini was promptly acknowledged as one of the more knowledgeable and capable Hindi scholars teaching in the West and writing in English. (A fair proportion of them happen to be, like Orsini, women born and brought up in nonAnglophone European countriesbut let that significant circumstance remain for the moment a red herring.) In her second book now, Orsini offers archival retrieval and detailed discussion of several genres and aspects of popular literature published in Hindi or Urdu in the last three or four decades of the nineteenth century. The book is divided into seven substantial chapters. After an extensive Introduction replete with facts and figures and references to relevant scholarship in both English and Hindi, Orsini takes up in her next three chapters oral forms which were in this period being turned into print for the first time: barahmasas, songbooks, and tales of conventional gender debates such as Kissa Tota Maina or Kissa Aurat Mard.

Her fifth chapter is devoted to a sprawling and episodic Urdu novel, FasanaeAzad by Pandit Ratan Nath Dar Sarshar, which Premchand read and reread with great relish as a boy and which at the height of his fame he found the time to abridge into Hindi under the title Azad Katha (1925), which runs close to a thousand pages.