‘Only a Trust in Our Hands’ 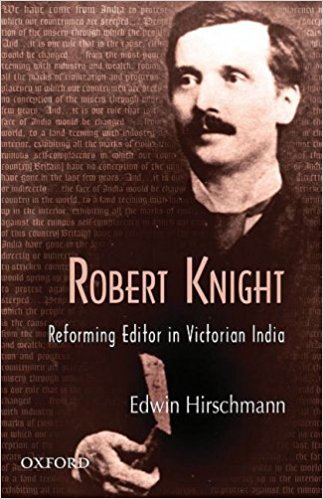 In a meticulously researched, erudite, and vividly written study, Edwin Hirschmann traces the life and career of Knight, founding editor of the Bombay Times of India and Calcutta Statesman, against a richly detailed canvas of Indian history from 1857 to 1890. In recovering the voice of a forgotten pioneer of the Indian press, Hirschmann illuminates a vital chapter of Anglo-Indian journalism. Robert Knight, he sets out to prove, ‘more than anyone else, made the press the “fourth estate” in India’. Hirschmann’s biographical study is a welcome addition to the growing body of works on early Indian journalism. With its focus on the English newspaper press in India, it supplements and complements recent volumes that are primarily concerned with the coverage of the subcontinent in the British media (see, e.g., Negotiating India in the Nineteenth-Century Media, eds. David Finkelstein and Douglas M. Peers, 2000; Chandrika Kaul, Reporting the Raj. The British Press and India, c. 1880-1922, 2003).

Piecing together fragmentary archival material (Knight’s private papers and other family records were destroyed in 1949), Hirschmann reconstructs the life of a remarkable Englishman. He can give us only glimpses of the private Robert Knight, husband and father of eleven children, who constantly struggled to support his large family on a meagre income. His focus is on Knight, the editor and internal critic of the Raj, who never tired of reminding Britain of its obligation to reform and modernize India. Seen largely through his editorial responses to key events in 19th-century Indian history, Knight emerges as a complex figure: a devout Christian, who went from advocating religious neutrality to seeing Christianity as the only way to India’s moral and social regeneration; and a firm believer in the ideal and mission of Empire, who was aghast at its bungled execution and the wrongs of imperial practice. For Knight, the Raj needed moral justification. To this liberal moralist, India was ‘only a trust in our hands, to be administered for the welfare of its people’.

The book traces Knight’s professional life in five chapters, outlining ‘the making of’ a reformer, editor, dissident, imperial critic, and ‘Statesman elder’. Hirschmann, professor emeritus of history, walks the biographer’s tightrope between the factual and the fictional with the firm stride of a seasoned historian, filling in biographical gaps and silences with ample historical context, informative detail, and critical insight. At times we get more history than life narrative: Knight, whose early years remain obscure, is introduced in absentia, through a discussion of the reformist climate of Britain in the 1830s and 40s. Hirschmann’s sympathy for his subject is well balanced by evidence of Knight’s impetuous and, at times, obsessive character. Knight’s enemies called him intemperate, unscrupulous, and impulsive; his friend Allan Octavian Hume described him as a kind-hearted man with ‘a vile-tempered pen’.