Offering Meaning to a City 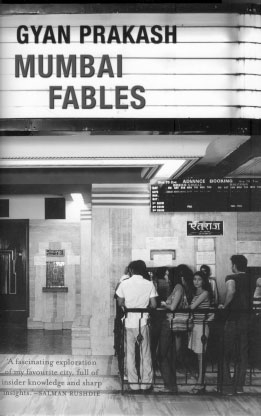 Mumbai Fables by Gyan Prakash is as layered as the city it explores. Walter Benjamin mentions a collectors passion bordering on the chaos of memories. The collector for him was as much a part of as he was apart from the various texts that make memories. There have been several writers who have used the collector as a tool to understand modernity but in Benjamins hands the flaneur this literary trope had taken newer dimensions.

Gyan Prakash stylizes in such a literary flaneuristic journey as he sets out on the streets of Mumbai with the goal not to strip fact from fiction not to oppose the real to the myth but to reveal the historical circumstances portrayed and hidden by the stories and images produced in the past and the present.

The flaneur has been an important tool to understand the phenomenon of urbanism and modernity. Prakash the literary flaneur plays a double role: while remaining a detached observer he attempts to be a part of the populace exposed to the reproduction and circulation of the fables of the city and apart from the historical sociological anthropolo-gical political architectural literary and historical narratives that he unearths and contextualizes.

Though the scope of the book is vast it is the treatment meted out to the selected episodes that make it as disparate and coloni-zing as the appropriation of land that the author so much dwells upon and layers meaning to.
It is the departure from the way Baudelaire and Benjamin not only understood but also tried to place the persona of flaneur in which problematizes the style that Prakash espouses.

Though Prakash claims that he is not deploying this trope the book on Prakashs part seems to be a quasi attempt at being a flaneur. It is in this quasiness that the book enters the realm of pedantry. This incoherent style of Mumbai Fables traverses between historical and the literary leaves the reader in a flux as chaotic as the proverbial Mumbai local.

The intertextual world of Mumbai fables escapes the trap of history as it attempts to focus not on the hard city but the soft city a city of illusion myth aspiration nightmare unravelling the history of the city as society. Albeit it is in its neo-literariness that the book becomes as taxing as the citys traffic jams.

For all its stylistic flaws the attempt at offering a meaning to a city especially that of Mumbai is engaging and interesting. The episodes and the fables of the city that Prakash chooses to explicate and understand are illuminating. He uses certain key episodes in the making of the life of Bombay or Mumbai to not only destabilize meanings but also to unravel the different ideologies that have undergone in making of Mumbai as we know it today.

Post Barthes myths havent been the same. They serve as an ideological function of naturalization. The literary flaneur collects ideas and memories that go into the construction of the myths that have been or come to be associated with Mumbai the dream city of cosmopolitan desire. The book traverses the various ideologies that myths naturalize. To quote from Barthes In passing from history to nature myth acts economi-cally: it abolishes the complexity of human acts it gives them the simplicity of essences it does away with all dialectics with any going back beyond what is immediately visible it organizes a world which is without contra-dictions… Things appear to mean something by themselves…

The memories stories or images chosen by the author are episodes in the life of Mumbai. Contextualizing every fable Gyan Prakash is able to expose the reader to the layers of ideologies that have gone into the making of this soft city.
Whether it is the Portuguese invasion for spices and Christians British imperialism nationalist sentiments radical literary movements the growth of celluloid rise of anti-colonial and Leftist ideology or the political and regional hooliganism of the present the book captures the various layers of society and ideologies in transition.

Though one gets excited with the nuanced reading of Mumbai that Prakash brings in this book through the episodes of his choice there is a certain absence of the soft city that one aims to find.
One of the challenges that comes with attempting a chronicle of a city especially so with Bombay or Mumbai is to make sense of all the chaos that adds to the mythic facets of the city. One needs to then start from the basic assumption of the city also as an imagined space.

The imagined space that is unearthed for the reader is episodic but the lack of a recurrent analytic base makes the reading appear excruciating and forced. If fables about the city thrive and get perpetuated then who is the subject of these imagined longings? Is it the circulation of images to the outsider to the boy in Patna fascinated by the lure of Bombay or is it the society living and making Mumbai home which partakes as much it constructs the city as a society?

It is the ambivalence of the episodes that do not allow coherence. At times it is excru-ciating for the reader to be forced to find meaning in the flux of society bounded as a city.

Prakash carefully selects and juxtaposes occurrences or episodes which he sees as symptomatic of a certain kind of ideology at play. There is no criterion of selecting episodes except a willful justification of the episodes in its ideological epiphanies.
The stories and images produced in the past and the present become as incoherent as some of the details that go into filling the pages of this book. The excerpt from an unpublished novel the Tower of Silence is far removed from forming any part of the stories and images that go into the making of the imagined metropolis. It just serves to justify a reading of the city.

However one of the biggest challenges with this book is the attempt by Prakash to turn it into a literary historical narrative. At times it seems a cathartic attempt to under-stand the authors own fascination with Bombay. A rumination on the death of Bombay as the author hungered for it from his childhood. This limits the historical reading of the city.

This book plays in no mans land. The author is careful to distance himself from putting any meaning to the reading of the city but the subjective voice at play in the book hinders any meaningful or insightful reading into city or the book.

It would have been best if the book was written with a little more clarity in its structure and the episodes had some semblance of unity to it. But the challenge lies with the subject itself. Trying to contextualize fables of a city especially so with Mumbai is no easy task as the social city may yet be different from the soft or the hard city.

Though Prakash contextualizes these stories and images it is the narrowness of the context that makes the reading of these fables problematic. Mumbai is no Singapore. It affects and is affected by the larger trends of the nation.
The history of Mumbai is closely tied to the history of the nation. In order to fully contextualize the symptoms of ideological occurrences in the history of the city through the historical circumstances that the book tries to unravel Prakash should have delved deeper into the changing norms of the nation or globe as a whole and attempted to uncover it from such macro prisms rather than diving into excruciating details about the selected landmarks in the history of the city. Though the attempt may be to unravel this imagined community it is in its attempted drama that Gyan Prakash fails miserably.
Its a chaotic book symptomatic of the city to which it attempts to give a history to.
In Prakashs ruminations are to be believed then Bombay the fabled cosmo-politan city based on an acknowledgment of cultural differences is dead and what thrives is now Mumbai a communal city marred by political greed.

What he does not take into ambit is the society that constitutes not only the images and stories of the city but also the city itself. It is a society; resilient enough to control its own cultural differences with all its flaws giving newer dimensions stories and images to the city. For the author the Mumbai floods may be a revenge of nature but it is the society that comes together to support itself that also constitutes the city.

The research that has gone into the construction of Mumbai Fables makes the reading interesting and erudite but the incoherent ramblings limit the book from illuminating Mumbai to its readers even through the prism of the fables that construct it.

It is a daunting task to unpeel the palimpsest that Mumbai has become. To his credit Prakash does attempt to depart from historical narratives about Mumbai and Mumbai Fables is a welcome addition to chronicle the history of the city.

Naved Farooqui lives in Mumbai and is a Brand Consultant with the Times Group.
[/ihc-hide-content]