Of The Apocryphal And The Authentic 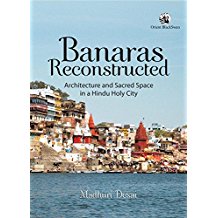 Of The Apocryphal And The Authentic
Ranjana Sheel
BANARAS RECONSTRUCTED: ARCHITECTURE AND SACRED SPACE IN A HINDU HOLY CITY by Madhuri Desai Orient BlackSwan, 2017, 312 pp., 1285
December 2017, volume 41, No 12

Banaras, generally characterized as the longest continuously living city and as a microcosm of Hindu civilization, has long enjoyed epithets of an eternal, timeless, unchanging, and archetypal Hindu holy city. It has, perhaps, for a city of its size, attracted much more attention from scholars of repute, and many of them, in recent times, have forayed beyond the domain of the sacred, to unravelling the complexity that Banaras represents. The sacred and the profane are so intimately connected that seeing one without the other would ascribe or impute homogeneity to the context. Indeed, the idea of Banaras cannot be viewed in the singular. In the book under review, Desai seeks to understand how the network of political authority, regional and imperial politics, cultural and social changes, urbanism, commercial imperatives and local indigenous agencies shaped the ideas and imagination of Banaras. Taking a long historical canvas, she traces how these imaginations took shape in the context of political shifts and the search for legitimacy by shifting power centres and accompanying class structures. Banaras, thus, underwent multiple reconstructions.