Of Successes and Failures 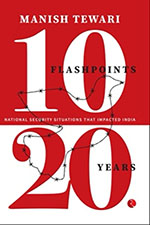 National security in India has been challenged by episodic events which can neither be treated as stand-alone events, nor ignore the heavier calculations that have adverse effects on the future.  The book attempts to contextualize the national security challenges through a choice of ten flashpoints within two decades beginning with the 1998 nuclear test at Pokhran up to the Kashmir imbroglio, 2019 and the Chinese incursions of 2020. Manish Tewari lays bare the facts related to these events, in a non-partisan manner, during the National Democratic Alliance (NDA) led by the Bhartiya Janata Party (BJP) and the United Progressive Alliance (UPA) led by the Indian National Congress (INC) rules at the Centre respectively. The targeted audience of the book, as stated in the preface by the author, includes the strategic community, independent intellectuals and most importantly, his fraternity in the Union and State legislatures to ruminate on the identified events for the sake of a viable national security doctrine and security posture. He leaves the scope wide for the reader to arrive at a conclusion while strongly making a case for establishing the National Security Doctrine within the Indian state. Almost all the events are connected to Pakistan and China with a play of external actors or Cold War foes such as the US and USSR/Russia.

The author argues that the 1998 nuclear test at Pokhran being India’s crowning moment like the 1974 ‘Smiling Buddha’ has not made the South Asian region and in particular India’s security more stable. The conclusion is similarly drawn in the chapter ‘India’s Nuclear Shangri-La’, when India succeeded in signing the civil nuclear deal with the US. As a second age nuclear power, India has to cooperate with its counterparts and the first age nuclear powers for a global agreement to go beyond mutually assured destruction (MAD) to coexist peacefully.