Of Stars and Firmaments, Politics and Life 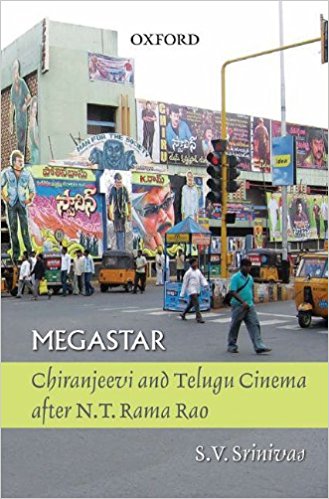 Here then is a short description of Telugu cinema: it is a cinema in the Telugu language made with borrowed plots, for ten crore speakers of the language, by an industry that makes politicians because it cannot make profits.’ This is how Srinivas concludes his book on the megastar Chiranjeevi. It is a ‘conclusion’ that sums up the trajectory of the book and its analysis. For, it traces not only the evolution of an actor into a star, a megastar and then a politician and idol of the masses, but also places it in the film-industrial and socio-political context that envelops it. Woven through the analysis are the film texts and the multiple discourses surrounding them, and in the process, the book throws up scintillating insights into the work of cinema in our popular imagination and society. Though the phenomenon of ‘stars’ and stardom have been a topic of study especially since the advent of cultural studies, these explorations were and are predominantly Hollywood-centric.

If at all ‘other cinemas’ found a place here, more often than not such analysis also employed concepts and theories developed in the Hollywood context, which were applied onto the milieu in question. Such exercises only serve to ‘universalise’ certain film theories all over again, by making other cinemas—Asian, African or Latin American—mere ‘examples’ and ‘proofs’ of an overarching theory.

This was very poignantly felt in the Indian context, which boasts of one of the largest film industries in the world in terms of its numbers and in the last decades, also its overwhelming global reach. It was with the entry of film scholars like Ravi Vasudevan, Ashish Rajadhyaksha, Madhava Prasad, M.S.S. Pandian and Sumita Chakravarthy that film studies in India on Indian films actively sought frameworks that were theoretically informed and regionally rooted. These scholars also broke the conventional modes and models of film criticism in India that were primarily engrossed with texts and basically ‘auteurist’ in orientation. As Srinivas puts it, ‘what we may be better off working towards is a better theory, not a special one’. His book is a continuation of such efforts, both with regard to its theoretical sweep as well as academic rigour. It is also a significant addition to the literature on star studies inIndia, following M.S.S. Pandian’s path-breaking book on the MGR phenomenon—The Image Trap.

Departing from the prevalent ‘mirror’ logic that interprets cinema, society and politics in a linear, one-to-one manner, Srinivas’s book emphasizes the need to ‘explain the cinema-society-politics relationship by pointing to the work of cinema’ in order to raise vital questions about the film industry, modes of production, and reception of films, and the activity of fans and their association as part of it. In his own words, it is the work of taking back the questions relating to the circulation of cinema to the analysis of films themselves. This in a very interesting manner, maps the social life of cinema in our society.

A major portion of Srinivas’s book dwells upon the question of fandom, which he thinks should be understood in the context of cinema’s materiality or what is specific to the cinema: ‘its filmic texts, stars and everything else that constitutes this industrial-aesthetic form’. Fan Associations are something peculiar to South Indian states and has been an enigma to many film scholars.They have looked at this phenomenon especially in the context of stars turning politicians as a one-way process of a star ‘influencing’ and creating a mass base, by harnessing films for political purposes where film narratives spill over into the domain of politics. Srinivas looks at it as a much more complex process involving adulation as well as demand, obligation as well as entitlement as he locates it in the history of Indian cinema’s publicness. It addresses certain vital questions that haunt contemporary film theoretical thinking on fandom in India. For instance, though fans’ associations were always there in South India, what has spurred its growth in such scale and intensity? Has it got to do with certain mass psychological proclivities specific to this region? Or, is it, in the South Indian context, conflated with linguistic identity politics that marks public mobilization? In other words, is star ‘a sign of unbound political passions in search of an object?’ And tangentially, is politics yet another genre of performance?

In the context of Andhra Pradesh, Srinivas locates it as part of the larger socio-political change in the 1980s marked by a proliferation of new, mobilizable constituencies: the naxalite uprising, the rise of dalit movements, and in the post-Emergency period, women’s movement and the invocation of ‘Telugu’ pride. It is in the post-NTR period that fan activity actually took the form of political activity. According to Srinivas, ‘while historically speaking, the political crossover of stars is a crucial development, fans’ involvement in politics actually precedes this development, suggesting that the immediate reason notwithstanding, fans’ associations were already being impacted by the overall proliferation of mobilizable constituencies.’ The entry of Chiranjeevi is also linked to the power-struggle between Kamma and Kapu communities in Andhra politics. But fan activity as such, though drawn across such community lines, is not defined by it, for they often flaunt their ‘secular’ credentials. What is interesting is that fans’ involvement in politics often had less to do with ‘the star’s own preferences and more to do with the complex mediation of local alliances, castes and politics’. Yet, ‘contrary to fans’ own hyperbolic declarations of their loyalty to the star, evidence from the ground suggests that the fan-star relationship is one of conditional loyalty.’ And for Srinivas fandom is a quintessentially cinephiliac response which has political consequences, hence basically ‘a response to the cinema, and not, say, a consequence of the religiosity of the masses in this part of the world.’

Obviously, star/fan or politician/cadre relationship is not a simple one of manipulation and resistance, influence and credulity, but one intertwined with linguistic, communal, regional and political dimensions and overlaid with such desires, aspirations and identifications. It is an ever-shifting domain where reality and fiction, film and politics, star fans and party cadres, devotion to stars and commitment to a certain ideology, industry and power collide and negotiate with each other.

The second part deals with Chiranjeevi’s films and his emergence as a star in the post-NTR era in the context of the evolution of Telugu mass film and cinematic populism. According to Srinivas, ‘in the mid-1990s the mass film and its stars became a part of a major crisis in the Telugu film industry. The crisis was, in part, a result of the collapse of the mass film, as also its past success. The examination of the mass film allows us to see how populism and blockage dovetail and in turn implicate Telugu cinema’s superstars.’ ‘Mass’ film is a loose film industry term referring to films that address the masses with formulaic elements like big budgets, stars in superhuman roles, lack of novelty of storyline, etc., and is used in contradistinction with ‘class’ film that addresses middle class audiences. It was this form around which Telugu industry grew from mid-70’s to mid-90’s. In many early films Chiranjeevi played the role of the rebel-hero, who is the product of the criminalization and degeneration of the public domain. Such crisis is often caused either by the absence of the benevolent feudal patriarch or the presence of an oppressive authority figure, or a combination of both. It is the figure of the rowdy or the rebel who resolves this crisis. But the crucial point that Srinivas examines here is the way films produce spectators, or in other words, how the star is deployed in the mass film ‘to seduce and incite historically located viewers into willing spectators’.

Extending Madhava Prasad’s notion about the aesthetic of mobilization, Srinivas makes some interesting observations about the star/fan politician/follower fiction/politics and film/reality relationship in this regard: ‘The political role played by the star in the fiction, is an extension of his mandate to act according to the spectator’s will. This role—of being the agent of the spectator’s will, of displaying at all times the recognition of an obligation to a spectator who is in turn entitled to make a series of demands on him—played by the star in the fiction, is analogous to his location in the fan domain. In both domains the star is obliged to fulfill the demands of the fan/spectator. Fandom, in turn, is evidence of the leakage of the willing spectator into the extra-cinematic domain, even as there is a textual inscription of the fan in the production of the genre’s spectator.’ As he succinctly puts it, ‘in politics as in films, the star arrives only because the fan-spectator was whistling interminably’.

Taking these notions further into the domain of industry and politics, Srinivas relates it to the process of ‘Bollywoodisation’ (in simple terms, ‘the attempt to define culture economically’) and employs the concept of ‘blockage’ to explain the economic crisis within the industry and the narrative crisis in film texts. ‘In the films from the mid-1990s we notice signs of change but also textual inscriptions of a blockage, something that resists. In hindsight, we can see that the resistance effectively deferred, if not prevented outright, the transition into a new narrative regime and an economic one that corresponded to it’. Films of the period, he observes, are structured around this blockage, manifesting at the level of the film story, genre and/or form and the consequent inability of the stars to free themselves from their imagi-chatram (literally, ‘image’s frame’ or the bind of the screen image the star has painstakingly cultivated.

Using several concepts from film and political theory, film texts, fan and political discourses from the Telugu context, Srinivas probes into this enigmatic phenomenon called stars, whom on is it, describes as those who ‘embody that particular conception of what it is to be human that characterizes our culture’. What makes this work of film theory even more relevant and interesting is that it grapples with the problem of untangling the riddles of citizenship itself in our context.

And thus, tries to answer the question posed at the beginning of the book:What can cinema tell us about the politics of our time?