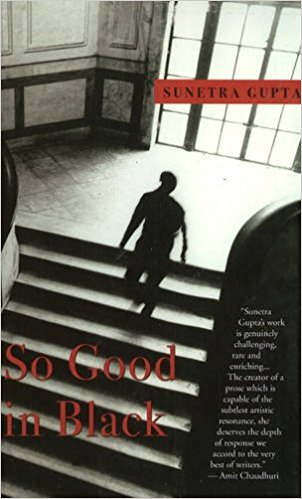 The finest testament to good writing is surely the demand for an accurate response in its reader. Sunetra Gupta’s So Good in Black refuses the exigencies of large frames. Hers is not a global or postcolonial novel. It is not even, in any applied sense, an ‘Indian’ novel, for it draws no deliberate attention to the overt concerns of modern India or the ambiguities and conflicts of Indian Diaspora, of which Gupta herself, strictly speaking, is part and parcel. What this novel is far more interested in is the experience of personal dislocation; the rational, emotional and ultimately moral failure of an individual system of thought; the relinquishing of what has always been known and lived by; the past giving up the ghost. That she settles upon 18th century Calcutta as a means of revisiting that city is, in part, an arbitrary choice. Calcutta, like all cities, has enjoyed a rich history.

The 18th century happens to have yielded some particularly lively egos, of which the incriminated Governor General Warren Hastings and his dashingly political attendants – Burke, Sheridan and Fox—are prime examples. However, what Gupta does not do is apply herself, self consciously, to the mission of cultural history and its laboured itinerary. Cultural specifics are rarely foreground attractions, but there is no sense of lacking particulars in her writing. On the contrary, her writing teems with quantities of particularities and peculiarities – referents of place and time—but those furnished by an exquisite sense of the personal: the repertoires of pertinent choices, tastes and turns of mind.

What she offers her reader is a detailed series of miniatures, an exquisite sequence of slowly turned globes of thought delivered with all the respect for the art of pondering that modern life rarely permits. Her writing is, in the most literal sense, absorbing: we sink into it. And as Emily Dickinson realized, the art of absorption is best produced through miniature forms. This essay will attempt the same.