Oeuvre of a Socially Committed Litterateur 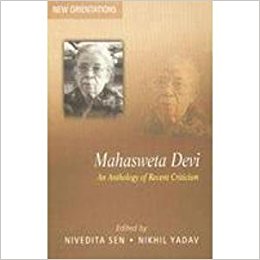 Octogenarian Bengali writer Mahasweta Devi is in the news again. This time for being the only Indian besides Nobel laureate V.S. Naipaul to be shortlisted for the prestigious Man Booker International Prize that recognizes the lifetime achievement of a litterateur. The present title under the publisher’s New Orientations series is thus a timely one, as interest in the works of Mahasweta Devi is likely to grow further with the £60,000 worth Man Booker news. Mahasweta Devi is one of India’s foremost literary personalities, a prolific author in Bengali of pathbreaking short fiction and novels and a deeply committed political and social activist who has been working with the tribals and other marginalized communities of eastern India for years. She has made important contributions to literary and cultural studies in India. Her empirical research into oral history as it lives in the cultures and memories of tribal communities was a pioneering effort.

Her powerful, haunting tales of exploitation and struggle of womenfolk have been seen as rich sites of feminist discourse by leading scholars.

Her innovative use of language has expanded the conventional borders of Bengali literary expression. Standing as she does at the intersection of vital contemporary questions of politics, gender, caste and class, she is a significant figure in the field of socially committed literature.

The essays in this volume seek to throw light on Mahasweta Devi’s oeuvre by bringing together thirteen critical readings based on English translations of her works written by different scholars at different times. They critique Mahasweta’s literary representations of the exploitation of the marginal and dispossessed groups by the dominant castes and hierarchies and attempt to show how she essentializes the aesthetics of literature as a weapon against such multiple oppressions. Although there is a sizeable bulk of Maha-sweta Devi’s works in English translation, critical readings of her works in English were so far scattered and piecemeal. Bringing the more important of these studies under two covers, this volume serves a useful purpose, especially in view of the fact that many of Mahasweta Devi’s short stories and novels are now an intrinsic part of syllabi in most Indian and many foreign universities. The anthology, by the editors’ own admission, is primarily meant for students, researchers and readers of Mahasweta Devi, who read her works in English.