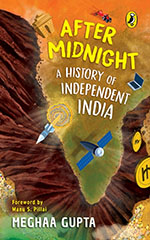 In 1984, Rajiv Gandhi became Prime Minister and launched a far-sighted tech policy which subsidized and allowed the liberal import of personal computers. A PC at world prices was prohibitively expensive and still out of reach for most middle-class urbanized Indians. The subsidy and easy terms for a loan allowed many to own a chunky PC and institutions also gradually started converting. One fall-out was the empowerment and creation of a generation of computer literate and net (launched 1995) savvy Indians. India today is one of the countries that has the most number of skilled computer professionals and workforce anywhere in the world and demand for them in Europe and America is very high. If only this foresight, vision and policy had been implemented by the state in Independent India for primary education and basic health also, instead of the measly few percent that is still allocated in the GDP, we would have been a different nation.