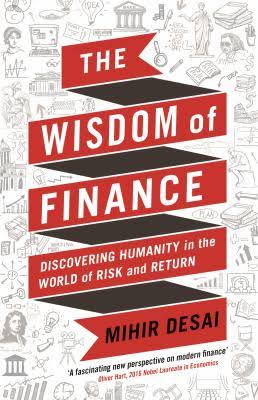 Acasual flip through this book can initially  intrigue as graphs, tables and allied statistical devices normally associated with books on ‘finance’ are missing and instead  entirely replaced by discussions involving  names such as James Joyce, Leo Tolstoy and Jane Austin and many others. The title can also intrigue as it is not often that the word ‘wisdom’ is used while talking about the practitioners or the issues associated with ‘Finance’. It is only when you start reading the book that you realize that Mihir Desai, a Professor at Harvard Business School and the Harvard School of Law has created what could well be a prose equivalent of a communication form more associated with music: the Fugue, a musical composition, such as that popularized by the compositions of Johann Sebastian Bach, in the eighteenth century as also by Ludwig Van Beethoven and others. Fugues open with a short main theme, or the subject, which then sounds successively in each voice (after the first voice has finished stating the subject, a second voice repeats the subject at a different pitch, and then other voices repeat in the same way); after the various voices have entered a continuous interweaving of the voice parts into a musical tapestry completes the exposition.

In the book, examples from literature as also problems associated with everyday life are interwoven to delineate the central concepts of some of the central challenges studied in a ‘Finance’ programme, in an erudite yet lucidly simple exposition aimed not only at the practitioners  of the financial world but also the lay person.