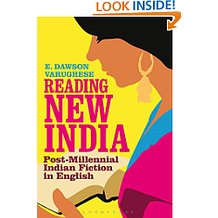 Some years back, I found myself attending the farewell function of a sarkaari officer, a bureaucrat. The usual white-cloth covered chairs, the podium with a small shaky wood table, a vase of short stemmed officious looking desi roses and a red carpet on the stage. Like the tradition of speech delivery goes, the speeches started from the junior-most officers and slowly moved upwards, in peculiar babu English. The finale was to be delivered by the senior-most bureaucrat sitting right in the centre. Finally this last bureaucrat got the microphone. And he said, ‘Today, I am again reminded of those lines, Debakanta Barua’s lines, “India is Indira, Indira is India”.’ And he went ahead to explain how the bureaucrat, the woman retiring (her name also Indira) was indeed the Department itself. He got a huge reception of claps from the audience. It would perhaps be an apt start for a post-emergency Indian-novel in English.

On one hand the anecdote in itself is peculiar to India, while on the other, words like ‘sarkaari’, ‘desi’ and ‘babu’ accentuate that ‘Indian-ness’. Daisy Rockewell in her paper: ‘The Shape of a Place: Translation and Cultural Marking in South Asian Fictions’ defines this practice of ‘cultural marking’ of a text to identify that text as ‘inhabiting a particular culture’. Varughese’s Reading New India dwells in detail on similar ideas: what are the mechanisms and preoccupations of ‘Indian Writing in English’ that uniquely qualify it as Indian writing in English? The book seeks to answer this critical question through a contemporary study of India and Indian literature in English in the context of their overlapping histories.

Reading New India works as a canvas to showcase the ‘new’ writings and happenings in post millennial India. It contemplates on the nature of the genres and themes emerging and connects the fiction with the cultural and socio-political shifts in India. The book starts by placing itself briefly in the history of Indian writing in English, the ‘present’ traditions. She briefly outlines it with works such as Bankimchandra Chatterjee’s Rajmohan’s Wife (the first novel written and published in English by an Indian writer), Sarojini Naidu’s, The Song of My City, and the Poetry of Toru Dutt (the first collection of Indian poetry published by a woman). Here Dawson also discusses writers such as Rudyard Kipling who knew India in another way, saw it through another lens, especially as to the use of the native language within their work. One is reminded of Edward Lear’s deeply witty poem ‘Cummerbund: An Indian Poem’, that was peppered by Lear with ‘Hindoostani’ words at the wrong places just so it becomes Indian. Varughese explores this influence of the Empire on the Indian writing scene in English with an interesting discussion on ‘code switching’, i.e., the use of Indian languages in Indian writing in English, and its particular contribution to Indian English literature. The same chapter also examines the work of postcolonial Indian writers, the canonical work that appeared in the 40s and 50s: R.K Narayan, Mulk Raj Anand, Khushwant Singh, Anita Desai, G.V. Desani and many more. Dawson notes: As the nineteenth century became the twentieth century, a generation of New Indian writers were born and their lives were shaped by the changing times; World War II, Partition and an immediate legacy of British colonial rule.

Proceeding in historical linearity the particular contributions of writers born in the 50s after India’s Independence—Upamanyu Chatterjee, Shashi Deshpande, Shashi Tharoor, Farookh Dhondy and others also find space. Varughese suggests that they (writers who published in the 80s) changed the perception of Indian writing in English from ‘something that is just about India in English to something in English that also explores India’. She specially studies the contribution of Salman Rushdie and Arundhati Roy to this enterprise of taking Indian literature in English to the world. Varughese explains: Rushdie’s impact not only on Indian Literature but also on world and transnational literature in English has been widely recognized. Roy’s novel has shaped both the Indian domestic literary scene as well as the Indian diasporic and international literary scenes. The God of Small Things (1997) written in English and Indian English(es) marks a certain turning point, not simply in Indian fiction in English but also in India as a country, its contemporary culture and society, finding itself on the brink of New India.

Reading New India covers the post- millennial Indian fiction in six sections: urbanscapes, chick lit to crick lit, young India, crime writing, fantasy and epic narratives and graphic novels. A quick look at the index itself explains what is ‘trending’ in terms of genres and themes in contemporary India. Each chapter gives a general sense of the kind of writing emerging: the styles, and the thematic motifs. Varughese also studies the work of a few authors in detail in every section.

In post-liberalization India most urban hubs have found a heightened character for themselves. A strange concoction of sports, media, politics, and economic change is at work here. It seems natural then that fiction should mirror these new formations, this cityness. Urbanscapes discusses this presence.

Anjum Hasan’s Neti, Neti: Not This, Not This (a Bangalore novel). And Adiga’s Last Man in Tower (set in Mumbai) have been chosen for a more elaborate study. Dawson’s analysis of the city motif did make me wonder on similar representations of the cityscape in Indian cinema as captured by filmmakers such as Sai Paranjpai, Saeed Mirza or lately by Anurag Kashyap and Dibakar Banerjee.

Academic work on Indian speculative fiction has been limited. The book addresses this huge gaping black hole in academic work with her chapter on Indian speculative fiction. According to her the genre can be divided further into two for India, a) focussing on fantasy fiction which includes urban fantasy, and b) the growing body of work that draws from Hindu epic narratives.Varughese calls the latter ‘Bharat fantasy’. The work of Basu, Ashok Banker, Amish Tripathi, Ruchir Joshi et al, is discussed here.

Reading New India presents the key critical debates in postcolonial writing in English along with the body of work that is happening in Indian contemporary fiction in English. From literary fiction writers like Anjum Hasan, Chandrahas Choudhury and Aravind Adiga to the work of the various genre writers like Anuja Chauhan, Sarnath Banerjee, Esther David and Kalpana Swami-nathan find representation.

The book ends with a short albeit worthy discussion on how the New Indian writing is devising new content from other forms and mediums. Varughese’s book is a gift for academics teaching Indian writing in English. And perhaps it will outshine all other books in the ‘academic’ library with its lively and pulpy, Karan Joharesque cover of bright yellow and pink. There is a fairly detailed author biographies section in the end.